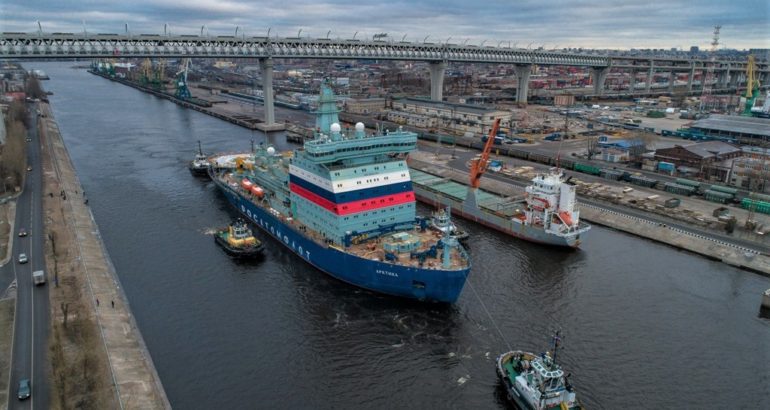 The Arktika lead nuclear icebreaker of project 22220 built by the Baltic Shipyard began the first stage of running trials, the enterprise said.

The first stage is to test standby diesel generators. The electric motion system will be checked, as well as motion transmission to the shaft. The trial team of the Baltic Shipyard and customer representatives will check the mechanical part of the power plant, ballast and general systems. Deck mechanisms will be tested, as well as anchors, mooring devices and lifeboats. A major stage are the tests of communications and navigation means.

The first stage of running trials will last four days in the Gulf of Finland. “Running trials are a major construction event. We shall hold the first stage by the end of the year and will be ready for full trials,” trial team head Vadim Golovanov said.

The icebreaker is 95 percent ready and is to be handed over to the customer in May 2020.

Project 22220 nuclear icebreakers can lead caravans of ships in three-meter Arctic ice. The dual-draft design allows the icebreaker to operate in ice and in Polar river deltas. The lead Arktika icebreaker of project 22220 was laid in November 2013 by the Baltic shipyard. The first serial Sibir icebreaker was laid in May 2015 and the second serial Ural in July 2016. The displacement is 33450 tons, the length is 173.3 meters. The two-reactor nuclear power plant RITM-200 has a 175 MW capacity. The speed is 22 knots. Maximum ice thickness in uninterrupted motion is 2.8 meters. The crew comprises 75 men.