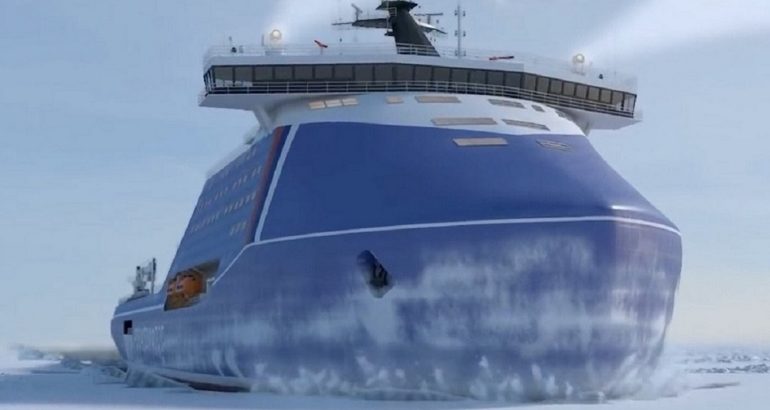 On April 23, Rosatom subsidiary FSUE Atomflot and shipbuilder Zvezda LLC remotely signed a contract on the construction of the nuclear icebreaker Leader (project 10510).

On April 23, Rosatom subsidiary FSUE Atomflot and shipbuilder Zvezda LLC remotely signed a contract on the construction of the nuclear icebreaker Leader (project 10510); the parties were respectively located in Murmansk and Vladivostok.

The document was signed by FSUE Atomflot general director Mustafa Kashka and Zvezda LLC general director Sergey Tseluyko. Zvezda shipbuilding complex is the sole contractor for this Rosatom-commissioned project. As per the terms of the contract, the vessel is expected to be commissioned in 2027.

“Today, an important step has been taken in the history of [Russia’s] nuclear icebreaker fleet. Leader will be equipped with two state-of-the-art RITM-400 nuclear reactors developed by Rosatom specialists, giving the vessel a total capacity of 120 MW, which will allow it to overcome ice more than 4 meters thick. The commissioning of this nuclear icebreaker will allow us to guarantee safe and regular operations in the eastern region of the Arctic Ocean, year-round navigation in the waters of the Northern Sea Route, and new possibilities for carving out high-latitude commercial routes.”

The nuclear icebreaker, Leader, will be built in accordance with technical specifications delineated by the central design bureau Iceberg and will be equipped with RITM-400 nuclear reactors developed by Rosatom subsidiary, JSC Afrikantov OKBM.

Rosatomflot operates the world’s only nuclear icebreaker fleet. The Zvezda shipbuilding complex is based in the city of Bolshoi Kamen of Russia’s Primorsky Territory and is overseen by Rosneft.

According to Russian media, the Leader will be able to break through ice with maximum thickness of 4.3 meters and lead cargo vessels at a speed of 11 knots in two-meter thick ice thus ensuring efficient navigation along the Northern Sea Route. Thanks to the vessel, Russia will be able to turn the sea route into a permanently operating waterway as it would provide year-round support to vessels on schedule regardless of weather conditions and ice situation. The icebreaker will be crucial for transporting oil from Yamal deposits to Asian and Pacific Ocean countries.

The new icebreaker will have a capacity of 120MW and will be the only vessel in the world to operate all year round along the Northern Sea Route in over 4-meter thick ice. At present the most powerful icebreaker is the LK-60 (60MW) of project 22220. The lead nuclear icebreaker of project 22220, “Arktika” started sea trials in December 2019.