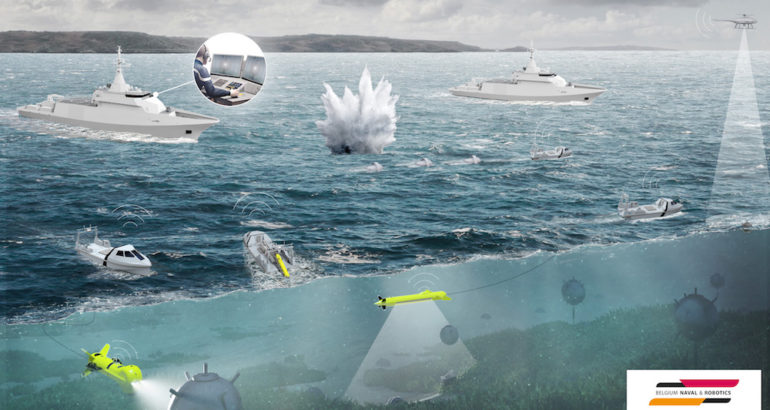 ECA Group to Build Mine Warfare Drones Plant in Ostend

ECA Group, an expert in robotics, automated systems, simulation and industrial processes, will build its new plant in the port of Ostend in order to carry out the contract to supply their unmanned systems for the 12 minesweepers of the Belgian and Dutch navies.

In 2019, the Dutch and Belgian navies decided to award the supply of 12 minesweepers (6 for each country) and the dedicated unmanned systems for mine clearance at sea to the consortium Belgium Naval & Robotics, set up by Naval Group and ECA Group. Many Belgian companies are involved in this nearly 2 billion contract as partner and supplier. Subsidiaries have been created in Belgium by the two companies to facilitate these exchanges.

The company ECA Robotics Belgium, the Belgian subsidiary of ECA Group, will manufacture the next generation of naval drones for this contract but also for future export sales, at its plant in Ostend. It concerns disruptive technologies that are the core of the innovative ‘stand-off’ mine hunting concept that Belgium Naval & Robotics proposes to the 2 navies, both world leaders in the field of mine counter measures: The mother ship and therefore its crew, stay away from the danger zone. The unmanned systems clear the mines autonomously and are controlled from the mother ship.

These unmanned systems will be manufactured in a new factory to be built in Ostend. PORT OSTEND grants ECA Group a concession for the building of the factory on the former site of Beliard in the port area. The plant with a surface of 5000 m² will be built on this location and will be operational in 2022.

The investment for the construction of the factory and the start of production represents around 10M €. All the naval drones (submarines and surface) of ECA group to be delivered to the Belgian and Dutch navies will be produced in this factory: the submarine drone A18-M, the towed sonar T18-M, the surface drone (USV) INSPECTOR 125 and the mine inspection and neutralization drones (ROV MIDS) Seascan and K-STER and launch & recovery systems drone-drone as well as surface equipment.

In parallel with the construction of our plant, ECA Group is looking for various profiles (including engineers) for the two Belgian sites of its subsidiary ECA Robotics Belgium: Hainaut in Wallonia where the design office and the headquarters will be established, and Ostend in Flanders to support plant operations. We are mainly looking for technical staff and workers for our site in Ostend. The plant is expected to employ over 70 staff in 2-3 years’ time.