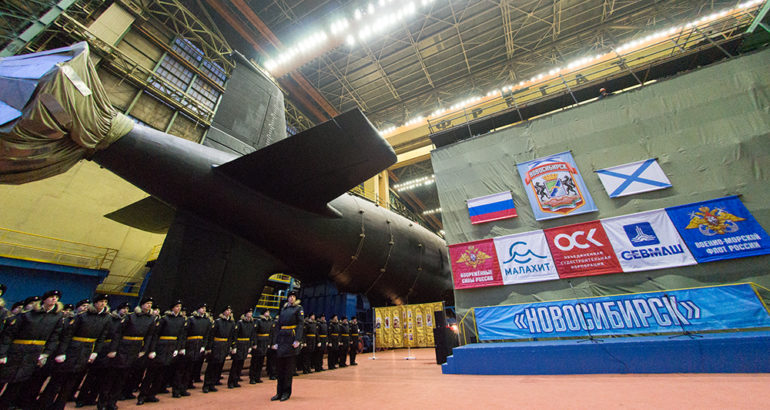 “The Novosibirsk was laid on July 26, 2013. It is built by an upgraded project with new element base of the electronic equipment and Russian-made materials. At the current rate of scientific progress, electronic equipment becomes outdated in 4-5 years. The submarine uses digital computing means designed by the Integration-SVT state program,”

Sevmash acting CEO Sergey Voronko said it was a major event and expressed hope that the construction of the submarine and all trials will be completed successfully in 2020.

Head of Belomorskaya naval base Konstantin Kabantsov said the Novosibirsk is a modern submarine with high combat capabilities.

The Russian Navy currently operates one SSGN of Yasen-class. It is the Severodvinsk K-560. It became operational on July 17, 2014. The Kazan K-561 SSGM of project 885M was floated on March 31, 2017 and is to join the Navy in late 2020. Both submarines were built for the Northern fleet. The Novosibirsk is to operate in the Pacific fleet.

Sevmash is building four SSGN of project 885M — the Krasnoyarsk, the Arkhangelsk, the Perm and the Ulyanovsk. In 2019, a contract for another two submarines was signed. They are to be laid on May 9, 2020.

Fourth-generation SSGN of project 885 and 885M have a displacement of 13800 tons. They can submerge to 600 meters and develop underwater speed of 30 knots. The light hull covers only a part of the solid hull in the bow to decrease the signature. For the first time the torpedo launchers are located behind the central compartment instead of the bow. The submarines are armed with Onix and Kalibr missiles, as well as torpedoes.