Home» News»GICAN Signed in Athens a Partnership Agreement with its Greek Counterpart, SEKPY 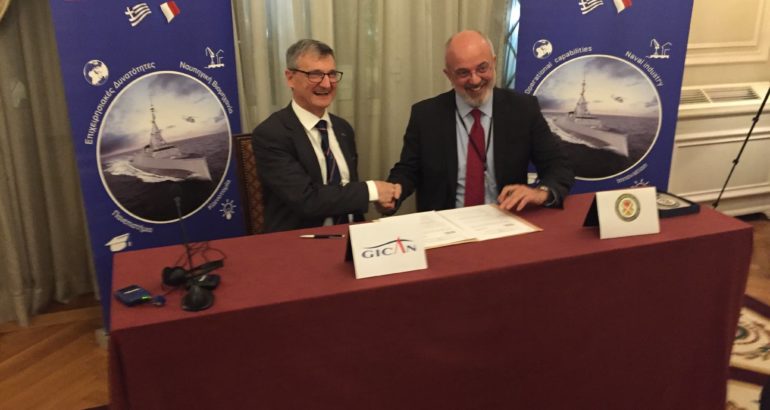 GICAN Signed in Athens a Partnership Agreement with its Greek Counterpart, SEKPY

The French marine industry association (GICAN) and the SEKPY (Association of Hellenic Defence Manufacturers) are signing in Athens a partnership agreement due to develop the shipbuilding industry cooperation between France and Greece and expand the R&D and innovation, the shipbuilding's SMEs and MMCs and European projects development together.

While EU countries are strengthening the European defense industry due to the European Defense Fund, France and Greece are developing their bilateral defense cooperation, including the shipbuilding sector. This “strategic security partnership” revived between Paris and Athens will be illustrated by a strengthened industrial cooperation over the coming months.

This signing partnership agreement between the GICAN, represented by M. Louis LE PIVAIN, Vice-President, and the SEKPY, represented by Anastasios Rozolis, President, on February 13th, 2020 in Athens in the presence of S.E.M. Patrick MAISONNAVE, French Ambassador in Greece, is the proof of its achievement, after NAVAL GROUP’s implication to Greek industrials partners. Thus, this partnership reinforce relations between France and Greece with the aim to:

The Defence Exhibition Athens – DEFEA will attend in Athens on June 22th to 24th, 2020, will mark the privilege relationship between GICAN and SEKPY. The GICAN federates the French Pavilion in DEFEA, where numerous compagnies of the French shipbuilding industry are expected. The French-Greek shipbuilding relation will also be honored during the next edition of EURONAVAL (from 20 to 23 October 2020), thanks to a dedicated event organized by the GICAN.

Louis LE PIVAIN, GICAN’s Vice-President declared: “It is an honor to sign in Athens, in the presence of the French Ambassador, this fundamental act for the cooperation between our two naval industrial bases of defense. From now, our companies, notably through the sector’s SMEs and MMCs, must take advantage of this agreement, related to the Europe defense’scurrent priorities and French and Greek bilateral commitments”.

Tassos ROZOLIS, SEKPY’s President declared: “Signing this partnership agreement with our counterpart GICAN, is aprivilege and great opportunity for both the Naval and Defense Industries of France and Greece to cooperate for the mutual benefit of our member companies in the new European Defence environment. We would like to thank the French Ambassador for hosting today’s ceremony”.