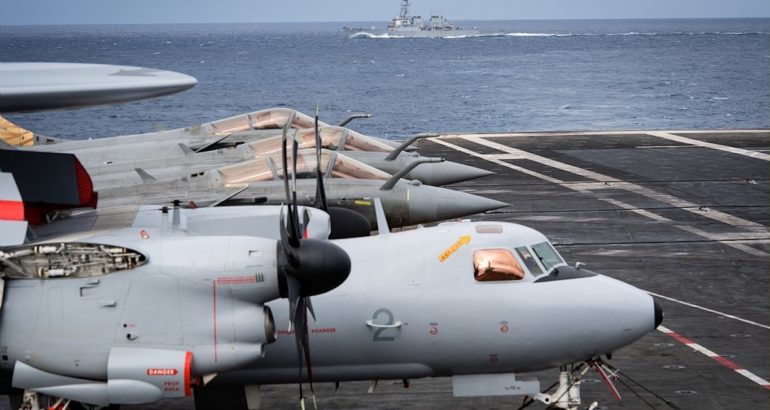 Aircraft carrier Charles de Gaulle is currently deployed in the eastern Mediterranean, as part of Operation Chammal, the French component of Operation Inherent Resolve (OIR) which gathers an international coalition to fight against Daesh.

The French and US navies regularly cooperate in exercises and operations in order to maintain a very high level of interoperability allowing them to be jointly engaged in theaters of operations. In addition to the integration of the USS Ross into the Carrier Strike Group, US Navy P-8A Poseidon Maritime Patrol Aircraft also cooperated with the two multi-mission frigates (FREMM) Auvergne and Bretagne escorting the GAN.

On February 10, USS Ross commander, Commander John D. John, was welcomed aboard the French aircraft carrier to formalize the integration of the US ship into the carrier strike group.

This vessel already joined Charles de Gaulle in 2019, during the Clémenceau mission, and more recently for the PEAN exercise preparing the CSG before its deployment. The commander of USS Ross, who recently took up duty, was able to discover the capabilities of the aircraft carrier and its escort.

This visit also made it possible to coordinate the modes of action of the USS Ross and the carrier strike group in terms of air defense and to streamline the exchanges and common objectives to be achieved.

Throughout the Foch mission, the carrier strike group will be joined by Allied navy vessels (Germany, Belgium, Denmark, Greece, Spain, the Netherlands and Portugal). This cooperation illustrates the strong ties, common know-how and mutual knowledge of France with its partners, guaranteeing common operational efficiency in the Mediterranean.