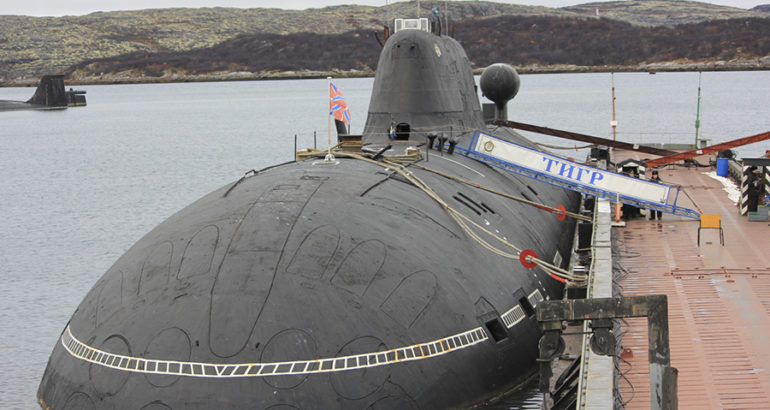 The overhaul of the Tiger (K-154 Tigr) nuclear-powered attack submarine (SSN) of project 971 (Akula-class) is to be completed by the end of 2023. The SSN has not made any sorties since 2010s. Three years ago, it was towed to the shipyard in Snezhnogorsk. The overhaul will increase its might due to Kalibr missiles, the Izvestia daily writes.

Sources in the Defense Ministry said the onboard equipment will be partially upgraded. The main innovations concern the weapons and torpedo launchers will be adjusted to fire Kalibr missiles. The Defense Ministry and the United Shipbuilding Corporation (USC) have agreed to complete the overhaul in 2023. The submarine is currently at Nerpa Shipyard of the USC. The enterprise is completing the overhaul of the Vepr sub of project 971.

Expert Dmitry Boltenkov believes the overhaul would extend the life cycle of the Tiger for at least five years. “Such submarines were the best in their time and exceeded US analogues of Los Angeles class. They remain the most noiseless. They were designed for antisubmarine operations in coastal waters and to fight adversary communications. The U-boats were armed with antisubmarine weapons and Granat cruise missiles. They have four 650 and four 533mm torpedo launchers,” he said.

Project 971 SSN performed reliably and can engage in a broad range of missions, he added.

“The upgraded submarines will be lethally dangerous for squadrons and aircraft carrying groups. One salvo can destroy several targets at a time. The attack needs to obtain target coordinates from satellites, drones, aircraft or warships,” he said.

The data have to be updated every half an hour or an hour to keep the adversary in sight, the admiral said. The homing warheads of Kalibr missiles will find the target themselves in the area reported by scouts. Submarine-carried Kalibr can be armed with a penetrating high-explosive warhead of 450 kg. The firing range is close to 1500 km.

Kalibr cruise missile were engaged in Syria and operated as a precision and faultless weapon. Now project 971 SSN can support ground forces or amphibious assault.

Project 971 SSN is a third-generation submarine. The first of them were handed over to the Navy in mid-1980s and operated in the Northern and Pacific fleets. They got the current names in the post-Soviet period. They were designated by letters and digits before that.

The submarines in the Pacific fleet are named after cities and sea animals. Northern fleet SSN are named after the submarines of the imperial fleet — the Pantera, the Gepard, the Tiger, the Volk, the Vepr and the Leopard. Therefore, navymen often dub the 24th submarine division of project 971 SSN as a “beast”.

The submarines were the workhorse of the Russian Navy operations in the oceans in 1990s. During a US operation, the Volk monitored NATO submarines at the coast of Yugoslavia, including a US Los Angeles-class sub. In 2012, the surprise appearance of project 971 SSN in the Gulf of Mexico triggered headlines in western media. The Nerpa was upgraded in 2012 and leased to the Indian Navy. It operates as the Chakra there, the Izvestia said.