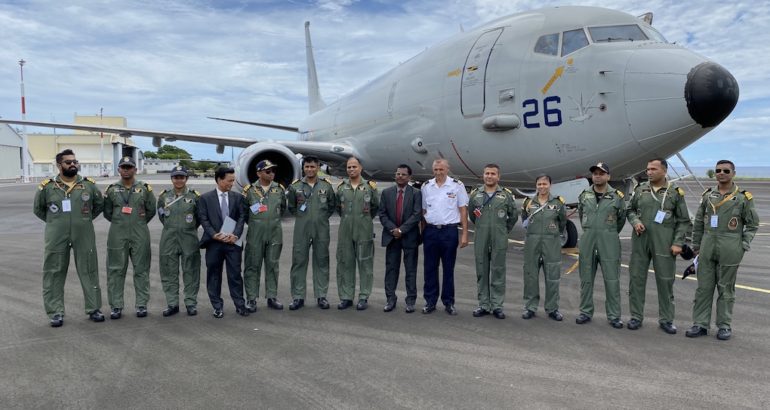 An Indian Navy P-8I Neptune Maritime Patrol Aircraft (MPA) visited Reunion Island to train with the French Air Force and Navy based on the island, known as "FAZSOI".

According to local media Zinfos974, the P-8I and its crew stay for 5 days on the French island located in the southern Indian Ocean, and flew back to India on March 3.

The visit of the Indian MPA is in line with the framework of the Indo-Pacific relations and France-India cooperation desired by French President Emmanuel Macron.

The commanding officer of “Détachement Air 181 La Réunion
« Lieutenant Roland Garros »” air base, located North of the island and which hosted the P-8I, explained that India is France’ strategic partner in the southern area of the Indian Ocean. The P-8I interacted with both the French Air Force as well as with the French Navy’s Floreal-class frigates based on the Island.

The commander of the Indian Navy P-8I told Zinfos974 :

“We are convinced that joint security operations make it possible to maintain the security of international maritime routes for trade and communications in accordance with international law to combat terrorism and maritime piracy, to raise awareness of the maritime domain and for better coordination of regional / international waters in the region. We expect fruitful engagements with the French Navy in the days to come ”

The United Kingdom is one of six international customers for the P-8A Poseidon. The first British Poseidon MRA Mk1 was delivered earlier this year. As a direct commercial sale, India has received eight of the P-8I variant to date with four more in production to be delivered from April 2020. The U.S. Navy is on contract to receive 111 with the potential for additional quantities based on the fleet’s needs. As a cooperative partner with the Maritime Patrol and Reconnaissance Program Office, Australia began receiving their P-8A aircraft in 2016 with eight delivered and four more in production; Norway will begin receiving their five P-8As in 2022; both New Zealand and South Korea have signed agreements with the U.S. Navy to purchase four and six aircraft respectively.