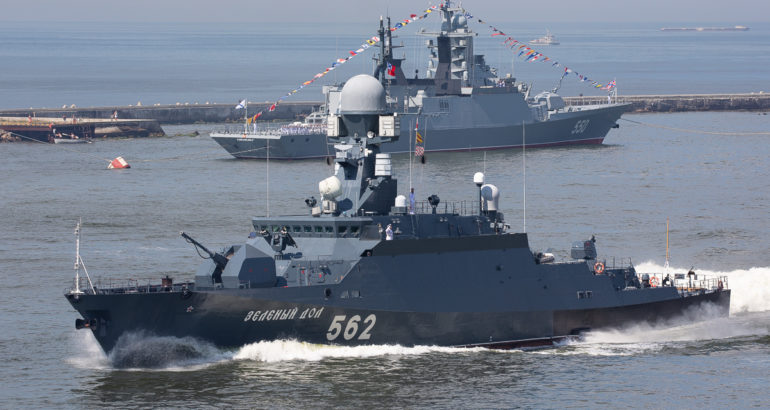 Buyan-M-class corvettes of project 21631 received new capabilities. Naval robotic mines joined their stock of arms. The smart munitions independently identify the type of sea craft and destroy it only after identification.

Project 21631 warships armed with Kalibr missiles will be able to lay minefields and block navigation, the Izvestia daily writes.

The corvettes were upgraded to engage robotic mines, Defense Ministry sources said. They held the first drills with new munitions. The corvettes were initially designed to defend the coast. However, the launches of Kalibr missiles from the Caspian and Mediterranean Seas at Syrian targets demonstrated their capability to strike to a distance of 1500 km.

Mines will make the corvettes more dangerous, expert Dmitry Boltenkov said. “The warships are good for inland seas where the distance between the key points of hostilities is short. The talk is mostly about the Black, the Baltic Seas and the Sea of Japan. The corvettes have a low signature and develop a high speed. They can easily hide in islands and bays. If necessary, they can rapidly advance to the assigned place and mine advance routes of the adversary. Other important targets are strategic straits,” he said.

Previously, corvettes did not carry mines, but the Russian military always wanted to adjust them for the weapon, he added.

At present, project 21631 corvettes operate in the Caspian flotilla, the Baltic and the Black Sea fleets. Several corvettes are under construction. Kalibr cruise missiles are their main weapon.

The corvettes are included into the so-called reconnaissance-strike and reconnaissance-fire forces. It developed them into universal attack platforms capable of operating together with land forces. The information is transmitted to the warships by Strelets reconnaissance and communication complex. It is suffice for a soldier on the coast to mark the target on the gadget and an artillery or missile strike will follow.

New types of sea mines can be planted separately or in a group. The electronics identify the floating craft by a special algorithm. The software knows acoustic portraits of warships to identify the targets. The so-called passports help understand which craft enters the destruction zone. A friendly ship will remain safe while a hostile vessel will be destroyed.

The Navy is drafting a concept of mine engagement. Smart munitions will create intellectual obstacles. Antiship mines can automatically create a combat formation. The control unit uses special sensors to create a single line. The approach prudently distributes targets between mines and selects the most important ones.

Each mine can be assigned a specific mission. For example, they can destroy only amphibious assault ships with hardware and spare the empty ones. In a group attack, they can ignore small minesweepers and explode major fire support ships. Submarines, naval, tactical and strategic aviation can also carry such mines.

Mines are rapidly developing. The US Navy has upgraded Mk.65 munition and work is ongoing to upgrade air mines. They carry a guidance system and course adjustment by GPS signal. The mines can be dropped from a major altitude and a distance of dozens of kilometers from the target. The exact number of sea mines in the US Navy has never been disclosed. Various estimates say there may be up to 10 thousand units, the Izvestia said.

Naval News Staff 29 Nov 2021
The Sredne-Nevsky Shipyard in St. Petersburg launched the seventh minesweeper of project 12700 (Alexandrite-class). The "Anatoly Shlemov" will join the Pacific Fleet of the Russian Navy in 2022.