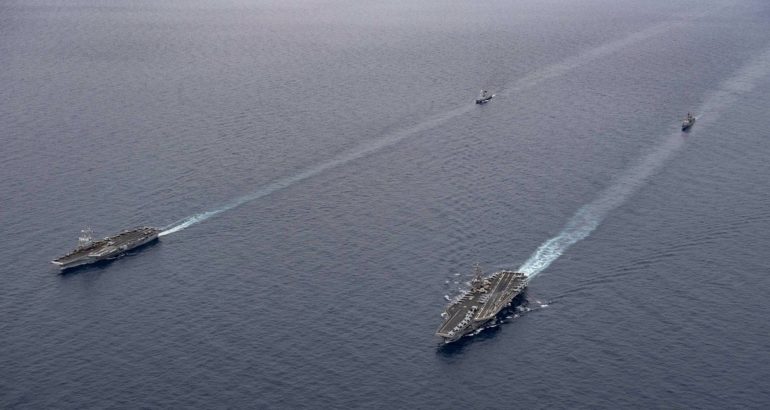 These dual-carrier operations demonstrate the combined military capability fostered by by the U.S. Navy working alongside the French Navy for many years.

“As a result of regular exchanges and cooperative training on a routine basis, our interoperability has advanced to an extremely high level. “Our navies are truly plug-and-fight, especially in the Mediterranean but also throughout the world.”

Charles de Gaulle (CDG) has a history of operating with U.S. carriers. In 2016, Ike and CDG similarly operated alongside each other and conducted joint operations in support of Operation Inherent Resolve from the Mediterranean Sea. As recently as last year, CDG also operated with USS John C. Stennis (CVN 74) while in the Red Sea.

“Our seamless interoperability at sea demonstrates our collective ability to conduct high-end integrated operations whenever and wherever we choose. Joint operations with these two carrier strike groups in the Mediterranean underscores the commitment of the U.S. and French navies to security and stability in the maritime domain.”

In 2016, the Arleigh Burke-class guided-missile destroyer USS Ross (DDG 71) operated with CDG as part of Combined Task Force 473 in the Mediterranean. Again, in April 2018, France, the U.K, and the U.S. conducted strikes into Syria in response to the Syrian regime’s use of chemical weapons against its own people. In 2019, and again as recently as last week, USS Ross rejoined CTF 473 to provide support to CDG.

U.S. 6th Fleet assets routinely exercise and operate with our French and NATO counterparts throughout the region. Exercises like Formidable Shield in the North Atlantic, Baltic Operations (BALTOPS), Sea Breeze in the Black Sea, and Obangame Express in the Gulf of Guinea demonstrate and further enhance our combined capability and capacity in the areas of land, sea and air.

“Direct information sharing, frequent exchanges between our staffs, and regular meetings with my friend Vice Adm. Lisa Franchetti all increase our effectiveness and the protection of our strategic sea line of communication in the Mediterranean Sea between Suez and Gibraltar and all our partners’ harbors,” said Isnard.

France is one of the U.S.’s oldest allies dating back to 1781 with their support in the U.S. Revolutionary War. This strong bond between our two nations reinforced our relationship and tested our joint combat skills during both World Wars. Today, these two navies continue in that great tradition of exceptional partnership.

U.S. 6th Fleet, headquartered in Naples, Italy, conducts the full spectrum of joint and naval operations, often in concert with allied, and interagency partners, in order to advance U.S. national interests and security and stability in Europe and Africa.