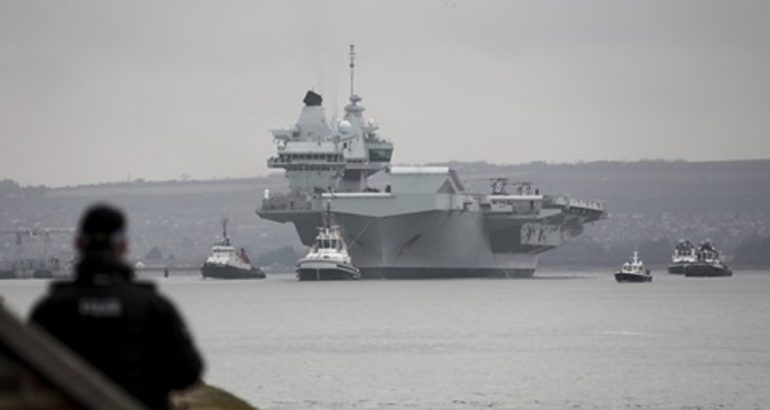 The Royal Navy aircraft carrier HMS Queen Elizabeth set sails from Portsmouth yesterday to ensure she is ready to conduct her first operational deployment in 2021.

The Portsmouth-based aircraft carrier will undergo several weeks of training and assessment with the staff of Flag Officer Sea Training (FOST) to ensure the UK can deliver on its commitment to have a Carrier Strike Group ready to deploy from the end of this year.

The continuation of this training has been agreed by senior leaders across Defence.

While many Royal Navy and Royal Marine personnel from the regular and reserve forces remain ashore supporting the current national fight against COVID-19, the ship’s company of HMS Queen Elizabeth are focused on ensuring that UK Defence remains prepared for future global threats.

HMS Queen Elizabeth will be put through her paces in UK waters off the south coast, facing simulated battle damage, fires and floods, as well as warfare training and mission rehearsals.

The training will include more qualifying training for UK F35 Lightning fighter jet crews, who will be conducting practice manoeuvres from her decks, giving vital experience to the aircrews and ship’s company involved in air operations.

This training will prepare the ship for further training later in the year with other Royal Navy ships to ensure they are ready to deploy as a task group next year.

All personnel sailing with the ship have undergone testing for coronavirus. As a further precaution, HMS Queen Elizabeth will conduct a period of isolation at sea, before she starts her training with the FOST staff.

She will be operating in waters close to the UK coast and the Commanding Officer has the discretion to cease the training if it is deemed necessary.

HMS Queen Elizabeth has a key role to play in the Defence of the United Kingdom and the Royal Navy will continue to conduct essential training ashore and at sea in order to fulfil its critical outputs now and in the future. Her sailing today marks yet another significant milestone in the regeneration of the United Kingdom’s carrier strike capability.