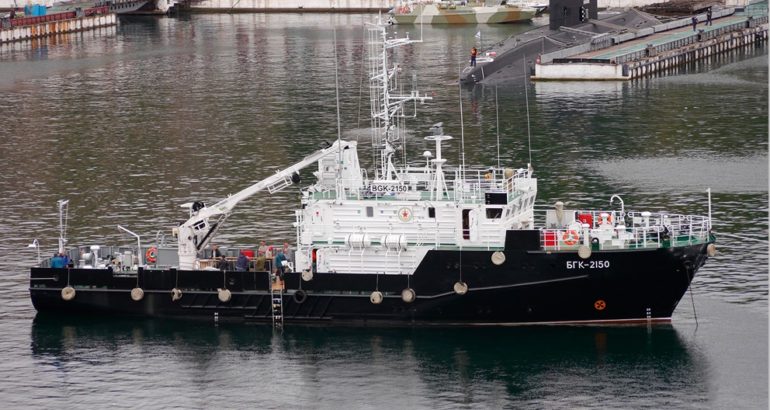 An Overview of the New Hydrographic Vessels of the Russian Navy

The navigation and oceanography department of the Russian Defense Ministry will receive a dozen new hydrographic boats and vessels by 2021. Each Russian Navy fleet will be reinforced with them. The Army Standard online publication studied the prospects of the hydrographic fleet.

One of the first modern vessels in the Russian Navy was the big hydrographic boat BGK-2149. It was accepted into service in December 2016. The Baklan-class project 19920 was designed by Vympel bureau in Nizhny Novgorod. The boat has to replace outdated vessels and expand their capabilities. Automatic navigational and specialized systems promote the fulfilment of hydrographic and buoy work in coastal waters. The boat services navigational beacons, buoys and marks. It uses the latest multi-beam survey echo sounder, hydrographic profiler, automatic retrievable hydrological probe, electronic mapping navigational integrated system, satellite radar, etc.

The Nizhegorodsky Teplokhod Shipyard is building big hydrographic boats of project 23040G. The Georgy Zima and the Alexander Yevlanov have been operating in the Baltic Sea for over a year. The Vladimir Kozitsky and the Boris Slobodnik will join the Black Sea fleet after trials. The shipyard will hand over to the Navy another two boats by late 2021.

Project 23040G boats cede in displacement to project 19920, but are comparable in effectiveness. They can study navigational dangers at depths of 400 meters and survey seabed relief at a depth of two kilometers. The boats service floating marks, deliver maintenance teams, engage in search and rescue operations, and provide pilot services to submarines and large warships. The navigational range is 2000 miles and the crew comprises nine people.

Hydrographic catamaran of project 23370G is another innovation. The lead vessel was laid on August 26, 2018 by KAMPO enterprise. It continues projects 23370 and 23370M for the rescue forces of the Navy. A year after the laying, the modules of the 140-ton boat were delivered by road from Moscow region for the final assembly by Vyborg Shipyard. The scheme optimally distributes the load on production capacities and saves the resource of the boats during transportation.

In late December 2019, the St. Andrew’s flag was hoisted on the Mikhail Kazansky lead boat of project 23370G. It has a catamaran design which expanded the deck space for hydrographic equipment. Although the boat has a size of 25×8.5 meters, it is more stable and easy for buoy setting. The 1.5-meter draft allows operating in shallow waters.

The boat carries modern equipment, including a survey echo sounder, a multi-beam echo sounder for information collection and processing, an autonomous hydrological probe and other devices. The boat is equipped with a modern navigation and communication system, a radar and an electronic mapping system.

Another innovation is a small hydrographic boat of project 19910. The Nikolai Skosyrev lead boat was laid in December 2015 by Vympel Shipyard in Rybinsk. Its navigation range is 3500 miles and cruising capacity is 25 days. The crew increased to 17 men.

The boat operates a multi-beam echo sounder which provides 3D seabed relief in real time. The ice-class stem provides for operations in a complicated ice situation at temperature of minus 25 degrees.

The Nikolai Skosyrev has to join the Northern fleet in 2020. It is undergoing trials at present. In January 2019, the Rybinsk Shipyard laid another boat — the Yakov Lapushkin. It has to go to serve in the Baltic Sea in 2020, the Army Standard said.

The above report by the Army Standard and TASS omitted another large vessel: The Academician Ageev (serial number 451) of project 16450. It was developed by Severnoye Design Bureau and is fitting out stage at JSC “Kanonersky Shiprepairing Yard” in St. Petersburg.

Academician Ageev is being built for the Main Directorate for Deep-Water Research (GUGI) of the Ministry of Defense of the Russian Federation. GUGI is responsible for fielding specialized submarines, oceanographic research ships, undersea drones and autonomous vehicles, sensor systems, and other undersea systems. Learn more about this vessel at this link.