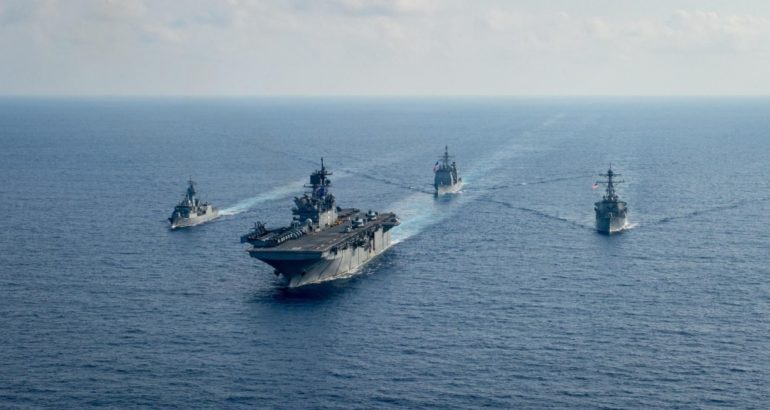 The U.S. Navy and Royal Australian Navy came together for operations in the South China Sea starting April 13.

“It is great to be operating with the Australians again,” said Captain Kurt Sellerberg, Commanding officer of the USS Bunker Hill. “Every time I have deployed to this region, and to the Middle East, I have had the good fortune to operate with the Royal Australian Navy.”

Operations with USS America started with a precision maneuvers that included Barry in the South China Sea.

“We look forward to every opportunity we get to work with our stalwart Australian allies at sea,” said Rear Adm. Fred Kacher, commander of the America Expeditionary Strike Group. “To bring this much combat capability together here in the South China Sea truly signals to our allies and partners in the region that we are deeply committed to a free and open Indo-Pacific.”

The events gave both navies the opportunity to integrate all warfare areas, and further strengthen the bond between both countries.

“I was super pumped to participate in cross-deck operations with the Royal Australian Navy,” said Lt. Rachael “Janet” Davis, “we are stronger together, and this type of integration promotes our commitment to maritime security as well as increases our presence here.”

The U.S. and Australia share a long history of integrated military exercises. Over 3,000 U.S. Sailors and Marines had the opportunity to observe or participate in the combined exercise.

“They have the same interest in ensuring freedom of navigation and observance of internationally accepted norms and customs pertaining to the law of the sea,” said Sellerberg. “The Aussies are true professionals in every sense of the word, and our current combined deployment exemplifies a shared commitment to our historically strong and enduring relationship.”