You are at :Home»News»Analysis: Main differences between Project 885M and Project 885 SSGN

The Kazan Yasen-M-class SSGN of project 885M has several differences from the Severodvinsk lead submarine of project 885. It is shorter and has a sharper bow, while the number of torpedo launchers decreased.

Besides, the SSGN received protection from adversary munitions. Experts believe the change in the submarine size means it has better mechanisms and equipment, the Izvestia daily writes.

Defense industry sources said the upgraded submarine has a sharper bow. It is impossible to see it on numerous photos of the Kazan, as most of it is hidden underwater. The number of torpedo launchers decreased from 10 to eight. For the first time both projects 885 and 885M have torpedo launchers close to the central post rather than in the bow.

Antitorpedo launchers are located in the bow close to the central post. The size of the propeller-rudder system increased. It was reported that the length of the submarine was cut by ten meters and the living compartment decreased by four meters. The changes could be accomplished due to modern and compact electronic arms and automatic means.

The Severodvinsk was laid in 1993 and the technical assignment was approved earlier. The construction used the materials and units initially designed for submarines of projects 971 and 949, expert Dmitry Boltenkov said. “Much has changed since then. Upgraded acoustic equipment and a new element base appeared. It would be stupid not to use them in submarine construction. The change in the bow form can mean that an upgraded and compact sonar antenna is located there,” he said.

The lead submarine of a project usually differs from subsequent subs, former submarine commander Hero of Russia Vsevolod Khmyrov said. “It is a usual practice. Changes have to improve characteristics of the equipment and the submarine in general. A new system can be accepted into service while a submarine is built. The designer and the customer will introduce changes and the size of the submarine may change. However, the project as a whole remains unchanged,” he said.

Project 885M SSGN have to fight adversary aircraft carriers, track submarines with nuclear weapons and strike at strategic ground facilities. They have eight universal vertical launchers and torpedo launchers. The submarine is armed with Kalibr cruise and Onix antiship missiles.

The range of the former exceeds 1.5 thousand kilometers and the submarine can target territories far away from the coast. Onix fights solo and groups of warships in conditions of electronic counteraction and strikes at ground targets. The submarine is able to fire Tsirkon missiles, the Izvestia said. 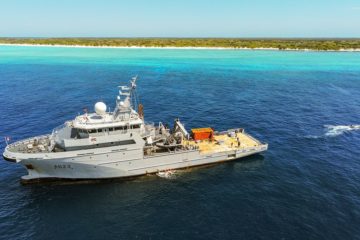