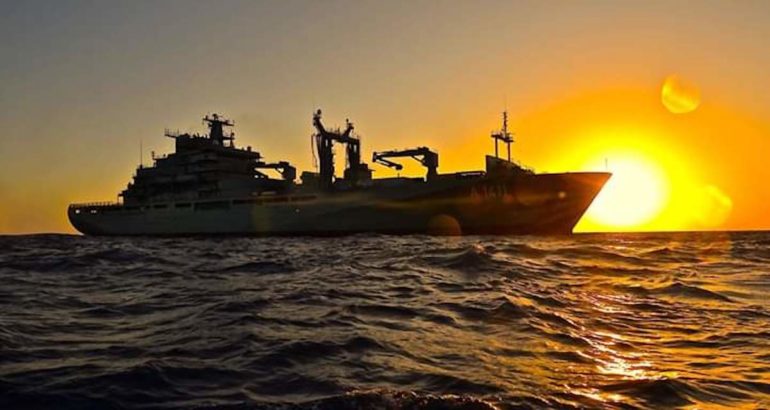 The Mecklenburg-Vorpommern frigate entered the Mediterranean Sea in mid-January. After a handover to Crete, she will go home and is expected to be back in Wilhelmshaven at the end of April.

« In view of the Coronavirus crisis, this assignment will be a particular challenge for the crew. But it is precisely because of this crew that I go about it with particular confidence. These are particularly valuable people who want to be there for others, »

In the Aegean Sea, the crew expects close cooperation with the Turkish and Greek coast guards and the European Coast Guard and Border Guard Agency (FRONTEX). The main task of the Berlin will be maritime surveillance.

When asked how the ship and is crew have prepared for this mission, the commandant replied: « Nothing much has changed in the usual preparations. The crew is fully trained for any mission. In addition, the ship is also in perfect technical condition Of course, like everyone else, the Coronavirus crisis gave us with additional challenges, which we were able to master. »

In view of the current situation, the Berlin’s 190 crew members had to say goodbye to their relatives in advance. The ship left the naval base without any public ceremony. The Berlin is expected to return to its home port of Wilhelmshaven in mid-September.

The Berlin (A1411) is the first of three Berlin-class combat support vessels. Their missions consist in the support of German naval units away from their home ports. The ships carry fuel, provisions, ammunition and other materiel and also provide medical services. The three ships of the class (Berlin, Frankfurt am Main and Bonn) are named after German cities where German parliaments were placed.

Berlin was built by Flensburger Schiffbau-Gesellschaft mbH & Co. KG. It commissioned in April 2001 and is homeported at Wilhelmshaven naval base.