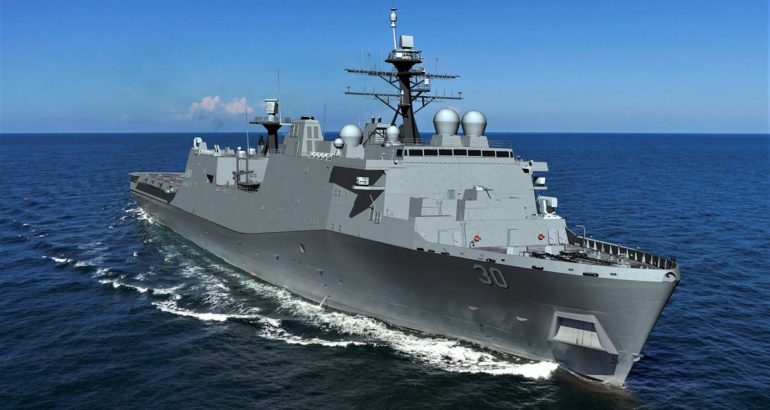 This rendering depicts Harrisburg (LPD 30), which will be the 14th San Antonio-class amphibious transport dock ship of the U.S. Navy.

“LPD 30 is the start of an exciting new era for the San Antonio class. The start of fabrication for Harrisburg marks the beginning of the LPD Flight II program. Through learning structured around consistent production, we’ve been able to identify design and construction modifications to make future ships in the class more affordable while fulfilling Navy and Marine Corps requirements.”

Ingalls has delivered 11 San Antonio-class ships to the U.S. Navy and has three more under construction including LPD 30. The ship will be the 14th in the San Antonio class and the first Flight II LPD. Fort Lauderdale (LPD 28) launched in March and is scheduled to deliver in 2021.

LPD 30 will be the second U.S. Navy vessel named after the city of Harrisburg, Pennsylvania. The first was a troopship acquired by the Navy during World War I that served in commission from May 29, 1918 to Sept. 25, 1919. That ship also served with the Navy in the Spanish-American War under another name. In addition to being the capital of Pennsylvania, Harrisburg is home to a number of Department of Defense facilities including the Naval Support Activity, Mechanicsburg.