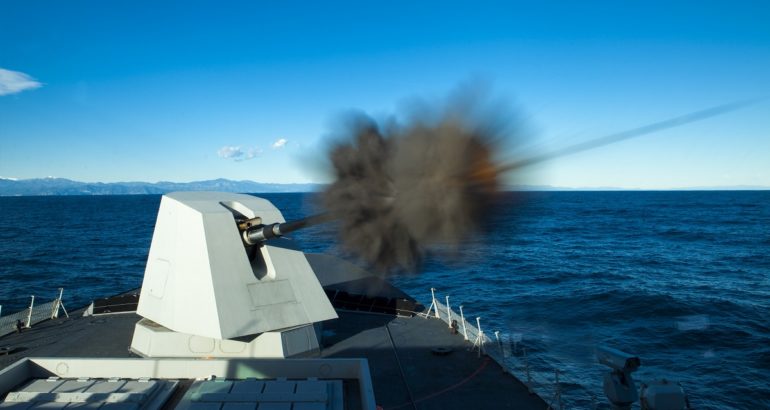 Following their recent selection by the Dutch ministry of defense (MoD) to supply new 127mm naval gun systems for the Royal Netherlands Navy’s LCF Frigates, Naval News contacted Leonardo to learn some more details. Here is what the Italian company told us:

The LCF are highly advanced air-defence and command frigates. The frigates (respectively named De Zeven Provinciën, Tromp, De Ruyter and Evertsen) were commissioned between April 2002 and June 2005 and are presently undergoing a modernization program. The class of ships is also known as De Zeven Provinciën-class frigates.

The 127/64 LW Vulcano is currently the most modern and performing gun in its market sector. It is currently the only one in the world able to fire the new Vulcano 127mm Guided Long Range (GLR) ammunition (that extend the operative range of the gun to more than 85km with metric precision), the new Vulcano Ballistic Extended Range (BER) ammunition (ballistic rounds able to achieve up to 60km with very high muzzle velocity and great accuracy) and the new Leonardo 4AP fuse for conventional ammunition (that grants high operational flexibility).

The rate of fire of the gun is more than 30 rds/m and the gun may store 56 ready to fire rounds in 4 drums that can be installed according to ship design in any Deck granting high flexibility to match any installation constraints. The gun is fully digital and equipped with Built-In Test Equipment that assist the operators at any moments. It is able to provide support to CMS in calculating possible firing solution for mission planning and it is equipped with a ballistic computer.

The gun operates fully unmanned in operation especially in case it is integrated with Leonardo Automatic Ammunition Handling System (AAHS) solution that allow the gun loading also during firing and without any crew assistance. The AAHS is able to manage at the same time both Vulcano and conventional ammunition and may be tailored to any ship layout according to space available and customer requirements in terms of number of stored rounds. The AAHS may be spread over more decks that can be interconnected through hoists that automatically transfer the ammunition among the different decks.

The Netherlands is the fourth European country to adopt the 127/64 LW Vulcano gun after Italy (on board of FREMM and PPA frigates), Germany (F125 class frigates) and Spain that has recently ordered it in December 2019 for the new F110 frigates.

The 127/64 LW Vulcano gun, that has also been bought by other two non-European navies, with a record of sales of 34 guns in less than 10 years and 7 more waiting for being ordered in the next years, is by far the bestseller gun of its class.