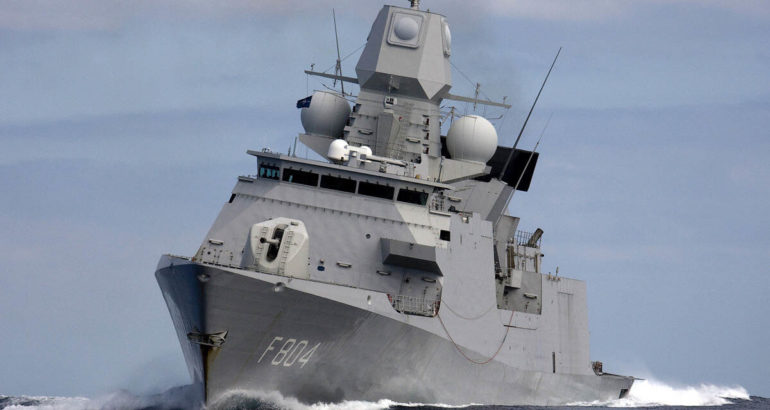 The head of the DMO, Admiral Arie Jan de Waard, announced in a tweet yesterday that the four gun systems would be delivered in the 2025-2026 time-frame and that local company Thales Netherlands will be in charge of their integration with the combat management system (CMS) of the frigates:

Another DMO representative explained that the Leonardo guns will come with an automated handling system and said that they will be be future proof because they can deploy smart ammunition:

Naval News understands that Leonardo was competing against BAE Systems’ Mark 45 mod 4, 5 inch (127mm) naval gun system for this Dutch contract. On March 20, 2019, a contract notice for the supply of 127mm guns was issued on the European tender platform TED. The programme named “Frigates 127 mm gun replacement program” had an estimated value between 50 and 200 million Euros.

Contacted by Naval News, a Thales Netherlands spokesperson said he could not comment yet on the company’s role. Leonardo told Naval News they would get back to us shortly with more details. We will update this article accordingly. No one at the DMO was available to take our call or return our emails by the time we published this article.

According to Leonardo (formerly Oto Melara), the 127/64 LW – VULCANO is a state of art medium caliber gun suitable for installation on large and medium size ships and intended for surface fire and naval gunfire support as main role and anti-aircraft fire as secondary role. The compactness of the gun feeding system makes possible the installation on narrow section crafts.

The Automatic Ammunition Handling System is a modular solution adaptable to any ship ammunition magazine layout; it is able to load the feeding magazine of the gun without man assistance during operation to allow a sustained firing action of the gun. The system is able to handle both standard 127mm /5-inches ammunition and new VULCANO family of ammunition

The 127mm VULCANO ammunition family, is composed by Ballistic Extended Range (BER) and Guided Long Range (GLR) ammunition with different multifunctional fuses, sensor and final guidance that extend the range of the gun up to 100km.

The Royal Netherlands Navy will become the fourth or fifth customer of the 127/64 LW after the Italian Navy (aboard the FREMM GP frigates and PPA), the German Navy (aboard the F125) and the Algerian Navy (aboard the Meko A-200AN). The Spanish Navy is rumored to have selected the gun for its future F-110 frigate program this has yet to be confirmed officially. Aboard the De Zeven Provinciën-class, the new guns will replace the ageing Otobreda 127mm/54 Compact which the Dutch navy procured used from the Royal Canadian Navy several years ago.

The Royal Netherlands Navy has 4 air defense and command frigates (LCF) of the De Zeven Provinciën-class. The ships can protect a complete fleet from enemy threats from the sea and from the air (aircraft and missiles). Specialized in anti-aircraft warfare (AAW) vessel, LCF vessels are fitted with 40 Mk 41 Vertical Launch Systems which are used to house and launch Evolved Sea Sparrow (ESSM) and SM-2 Block IIIA missiles.

The De Zeven Provinciën-class consists of:

The first-in-class ship received her SMART-L Multi Mission radar upgrade from Thales in March 2019. All four ships of the class will be upgraded with the new radar (and other systems) as part of a modernization programme. This new radar is capable of BMD mission (surveillance and tracking of ballistic missiles) up to 2000 km while simultaneous maintaining the air defence capability.

The LCF mordernization effort includes other systems: Plans were announced in 2018 to acquire the BMD-capable SM-3 surface-to-air missiles (these plans still need to be confirmed). De Zeven Provinciën-class frigates can pass on the tracking and detection data to other sea-based or land-defense BMD assets, including U.S. Navy’s warships, that can deal with a ballistic missile threat.

On 3 May 2018 the Dutch Secretary of Defence, Barbara Visser, informed the Dutch national parliament that the Raytheon evolved sea sparrow missile (ESSM) aboard the De Zeven Provinciën-class frigates will be upgraded from block 1 to block 2. This upgrade will be completed by 2024 along with a new anti-ship missile (to replace the existing Harpoon). Lastly, the Thales Goalkeepers CIWS will be upgraded to a new version. They will eventually be replaced after 2025 by a new system.