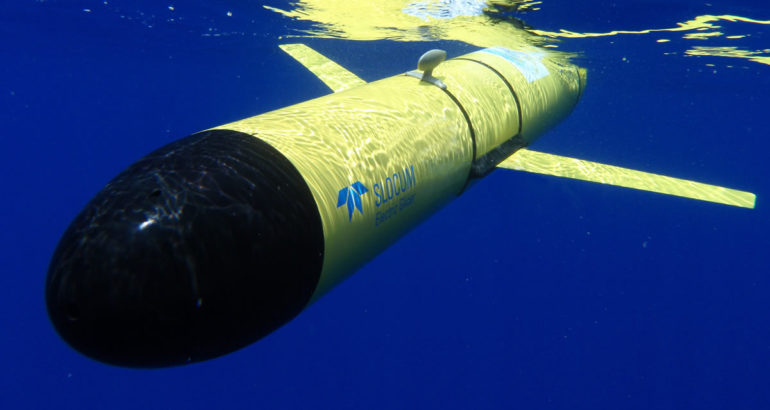 Underwater gliders that can rapidly send vital information that could give an extra edge to the Royal Navy’s submarine hunting operations are being rigorously trialled in the North Atlantic.

One of the Slocum Gliders is right now being tested to the limit as it hoovers up information about the seas west of Scotland during a five-month deployment.

These parameters can impact the efficiency of the sonar and sensors used by the Type 23 frigates and Merlin and Wildcat helicopters – as well as the Royal Air Force’s P-8 Poseidon – during submarine hunting operations.

Currently, data collection takes months, but these gliders can not only provide unparalleled insight, they can also relay information in a matter of hours.

The intention is for the navy to eventually deploy gliders continually to high-threat areas to give a clear and constant picture of the underwater battlespace, meaning operational decisions will be based on the very latest information.

Having this data quickly means sub-hunters will be able to adapt better when they are attempting to detect underwater surface threats.

“Ocean environments are changing – what we knew 20 or 30 years ago doesn’t apply now in many areas, particularly the North Atlantic which is our backyard for submarine operations and probably one of the most complicated and challenging bodies of ocean,” said Captain Pat Mowatt RN.

“Salinity, sound velocity and temperature have all changed.  We need to know these accurately as we strive to understand more and more about the undersea environment (battlespace) and how this effects the performance of ship and submarine sensors so we can achieve an operational advantage.”

The way sound travels through water is greatly affected by the water temperature, pressure and salinity, which impacts the effectiveness of sonar and sensors used by ships and aircraft to track submarines.

The gliders can provide up-to-date information on these matters quickly to TAC HM (tactical hydrography, meteorology and oceanography) trained officers who can then advise submarine hunting commanders about the range of the ship’s sonars and how to adjust settings for best results.