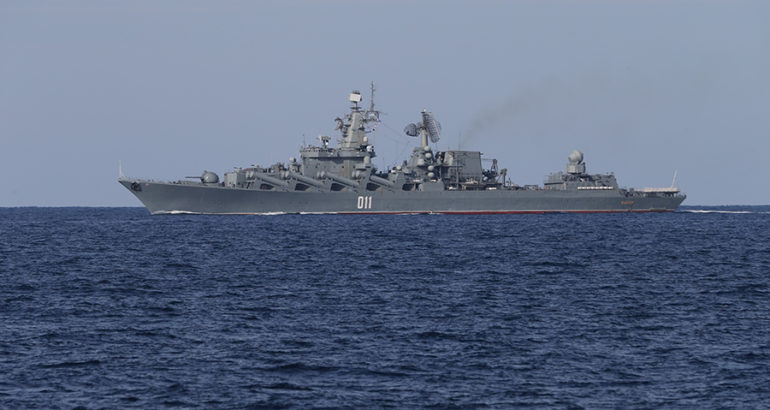 The Russian Pacific fleet held large-scale maneuvers of the surface forces. They trained integration of the latest controls, arms and electronic warfare and the inclusion of the latest warships into a single command system.

The Izvestia daily writes how the fleet capabilities will change in the Pacific Ocean and about the role of the fleet in the strategic direction.

The maneuvers engaged ground, air and sea components. The aim was to integrate them into a single force. The naval component trained the biggest deployment in the latest history. On March 26, the Japanese forces spotted 18 warships and auxiliary vessels in La Peruza Strait, including the Varyag cruiser, the Bystry destroyer, two big and two small antisubmarine ships, six missile boats, the Marshal Krylov command ship, the Yenisei hospital and other auxiliary vessels.

On April 1, the Gromky and the Sovershenny corvettes were seen sailing south in Tsushima Strait. The Admiral Vinogradov antisubmarine ship was sailing back to the base. In Kamchatka, ten warships, including the recently upgraded Smerch missile ship sailed out. Several warships and vessels engaged in specific missions. The Igor Belousov rescue ship assisted a conditionally wrecked submarine. Actually, the whole surface force of the Pacific fleet sailed out.

It deployed and created tactical groups, trained missile and artillery fire and antisubmarine and antimine operations in the Seas of Japan and Okhotsk close to Kamchatka. The airpower actively participated. Tu-142M3 and Il-38 antisubmarine aircraft made several flights. A pair of Il-38 was even intercepted by US F-22 in the Bering Sea. MiG-31 fighter jets were engaged, as well as Tu-22M3 strategic bombers of the 326th division.

There were no reports on submarine engagement, however it is not ruled out.

The latest frigates, corvettes and other warships are mostly supplied to the west of Russia. The Baltic and the Black Sea fleets have been considerably renewed. No warships are built for the Pacific fleet so far. Unfortunately, the shipbuilding pace cannot rapidly renew the Pacific fleet. Therefore, the main attention is paid to modernization of the available Russian naval might in the Far East. The Smerch small missile ship has been recently upgraded and replaced the old Malakhit missiles with modern Uran. Three similar missile ships will be upgraded as well. The modernization of the Marshal Shaposhnikov frigate is nearing completion. It will be armed with Kalibr and Uran missiles, the Izvestia said.