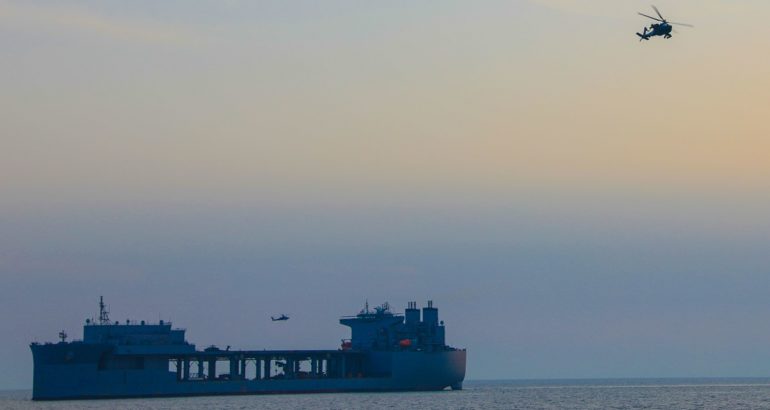 200325-A-UQ166-0310 ARABIAN GULF (March 25, 2020).AH-64 Apache helicopters, attached to the U.S. Army Central Command (ARCENT) Task Force Sabre, operate with the expeditionary landing base ship USS Lewis B. Puller (ESB-3) during a joint naval and air integration operation, March 27, 2020. Lewis B. Puller is deployed to the U.S. 5th Fleet area of operations in support of naval operations to ensure maritime stability and security in the Central Region, connecting the Mediterranean and the Pacific through the Western Indian Ocean and three strategic choke points. (U.S. Army photo by Spc. Cody Rich)

The operations, which are designed to enhance the capabilities of U.S. forces to respond to surface threats, have involved Puller performing as a landing base platform for the Apaches, while Cyclone class Patrol Coastal (PC) ships select simulated targets for them to engage. The guided-missile destroyer USS Paul Hamilton (DDG 60) also participated in the joint operations.

“The integration of U.S. Army air weapons teams with other joint fires into the maritime environment greatly enhances our ability to expand reconnaissance and attack capability. The Apaches, in coordination with our surface ships, allow us to hold an adversary at high risk at extended ranges. Combined with other joint fires, these aircraft significantly increase the precision lethality of our joint maritime forces.”

The Apache AH-64E is a twin-engine, four bladed, multi-mission attack helicopter designed as a highly stable aerial weapons-delivery platform. It is capable of destroying an array of mobile armored targets on land and sea using a 30mm automatic gun, aerial rockets and AGM-114 Hellfire missiles.

Similar integration operations with Special Operations assets were conducted in the Arabian Gulf between U.S. naval forces and MH-6M Little Bird helicopters during Operation Earnest Will from 1987 to 1988.

“Working with USARCENT forces represents another key capability in our ongoing integration of naval and air assets across our joint and coalition force to ensure maritime superiority. This kind of cross-domain integration allows us to maintain highly lethal and effective defensive capabilities, regardless of what platforms are operating in theater.”

About Expeditionary Sea Base – ESB

Built by General Dynamics NASSCO, the Montford Point-class is comprised of five ships across two variants: expeditionary transfer dock and expeditionary sea base. USNS Montford Point (T-ESD 1), USNS John Glenn (T-ESD 2), USS Lewis B. Puller (ESB 3), and USNS Hershel “Woody” Williams (ESB 4) have been delivered to the fleet. Miguel Keith is the third platform of the ESB variant, and is scheduled to deliver later this year.

The ESD and ESB ships were originally called the Mobile Landing Platform (MLP) and the MLP Afloat Forward Staging Base (AFSB), respectively. In September 2015, the Secretary of the Navy re-designated these hulls to conform to traditional three-letter ship designations.

The design of these ships is based on the Alaska class crude oil carrier, which was built by General Dynamics National Steel and Shipbuilding Company (NASSCO). Leveraging commercial designs ensures design stability and lower development costs.

USS Lewis B. Puller (ESB 3), the first ESB delivered, along with follow ships Hershel “Woody” Williams (ESB 4) and Miguel Keith (ESB 5), are being optimized to support a variety of maritime based missions including Special Operations Force (SOF) and Airborne Mine Counter Measures (AMCM). The ESBs include a four spot flight deck, mission deck and hangar, are designed around four core capabilities: aviation facilities, berthing, equipment staging support, and command and control assets.

Montford Point (T-ESD 1), John Glenn (T-ESD 2), and Hershel “Woody” Williams (T-ESB 4) have all delivered to the U.S. Navy and are operated by Military Sealift Command. In August 2017, upon arrival in the U.S. 5th Fleet Area of Responsibility, ESB 3 was re-designated from USNS and commissioned as a USS. As a commissioned Navy ship, USS Lewis B. Puller (ESB 3) is commanded by a Navy O-6 with a permanently embarked military crew. This re-designation provides combatant commanders greater operational flexibility as to how the platform is employed in accordance with the laws of armed conflict.