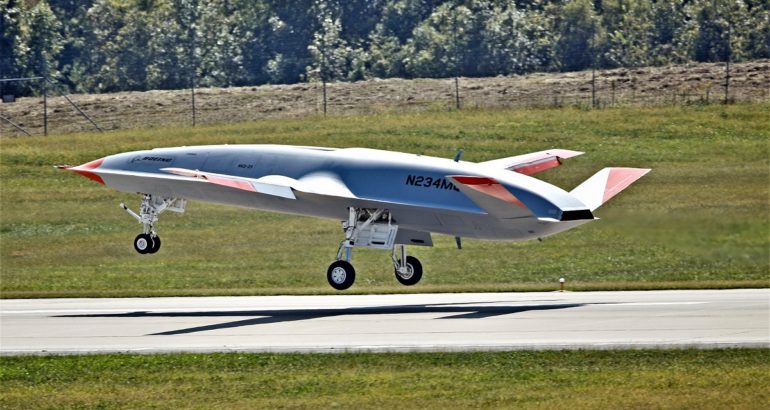 This $84.7 million modification exercises options for three MQ-25 system demonstration test articles, and was an option identified in the original $805 million contract for four aircraft awarded in August 2018.

“We’re honored to have the Navy’s confidence in our system design and performance that is evident from this additional order. This order establishes uninterrupted production of the first MQ-25 aircraft and lines up with the Navy’s MQ-25 test and training plans for fleet introduction. The MQ-25 program is vital in ensuring the Navy can deliver a critical unmanned aerial refueling capability to the carrier air wing.”

Early flight testing of Boeing’s MQ-25 test asset, T1, is contributing to program progress. The company recently concluded the first round of flight testing for T1, resulting in nearly 30 hours in the air at various speeds and altitudes. The aircraft is now undergoing a planned modification that includes installation of an aerial refueling store (ARS) under the left wing. Flight testing with the ARS will resume later this year.

About the Boeing MQ-25 Stingray

MQ-25 is designed to provide the U.S. Navy with a much-needed refueling capability. According to the U.S. Navy, the MQ-25 Stingray will allow for better use of combat strike fighters by extending the range of deployed Boeing F/A-18 Super Hornet, Boeing EA-18G Growler, and Lockheed Martin F-35C aircraft. MQ-25 will also seamlessly integrate with a carrier’s catapult and launch and recovery systems.

The MQ-25 UAS is powered by a sole Rolls-Royce AE 3007N turbofan engine delivering 10,000 lb (4,500 kg) of thrust. The aircraft features a stealthy fuselage shape, flush inlet to shield engine blades from radar and a V-tail.

Exact specifications of the MQ-25 are yet to be disclosed publicly. Its first flight was conducted on September 19, 2019.