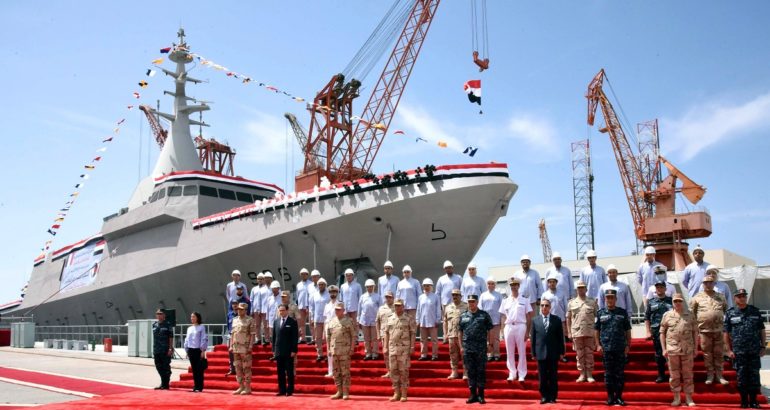 The "Luxor", the fourth and final corvette of the El Fateh-class, Gowind 2500 type corvette, was launched at the Alexandria Shipyard on Thursday, May 14, 2020. It is the third corvette of this class built in Egypt.

The contract for the acquisition of four Gowind 2500 corvettes (with an option for two more) was signed shortly before June 3, 2014 for 1 billion euro, a sum which did not include the weapon systems which were ordered in two separate contracts: one for 400 million euros for MBDA (VL-MICA, MM40 Block 3), the other for approximately 100 to 200 million euros for Naval group (torpedoes). The overall cost of the program is therefore between 1.5 and 1.7 billion euros.

The four Gowind 2500 corvettes of the El Fateh-class are 102 metres long with a maximum width of 16 meters and a draft of 5.4 meters. The displacement at full load is around 2,600 tons. They are manned by a crew of 65 sailors and the accommodation on board can accommodate up to 15 special forces operators. The aviation installations allow the use of a 10-ton class helicopter.

The Combined diesel-electric and diesel-mechanical (CODED) propulsion system consist in two diesel engines (MTU) and two electric engines (Leroy-Somer) for a propulsive power of 10 MW. This allows the corvettes a maximum speed exceeding 25 knots. Their maximum range at 15 knots would be between 3,700 and 4,500 nautical miles.

The construction program for the four corvettes included the construction and docking of the head-of-series at Naval Group’s Lorient shipyard (in Brittany). The first steel cut of the future ENS El Fateh took place in April 2015. Keel laying took place on 30 September 2015, the launch on 17 September 2017 and the commissioning on 22 September 2017. The entire process took only 29 months to complete.

The three other corvettes were assembled at Alexandria Shipyard (ASY) under technology transfer. The launches of ENS Port Said (September 7, 2018), ENS El Moez (May 12, 2019) and ENS Luxor (May 14, 2020) took place regularly and in a staggered manner. It took 61 months between first steel cut of the first corvette and the launch of the fourth ship in the program.

According to French shipbuilder Naval Group the launching ceremony of Luxor celebrates the rise in competences of the Alexandria Shipyard teams who are now able to build civilian boats as well as military vessels. Contacted by Naval News, a Naval Group spokesperson said:

“Naval Group is proud to participate to the modernization of the naval forces and defence infrastructure of Egypt, its self-reliance and its sovereignty. This launching event is also an opportunity to reaffirm the commitment to the mutually beneficial partnership Naval Group has built with the Egyptian Navy. The Egyptian success is another proof of the importance of the rise in competencies achieved through technology transfer. In few years, ASY, which used to be a civilian shipyard has deeply transformed. The experts have gained new high added value skills, they are able to achieve complex military qualifications and high-quality results. Naval Group’s local team is proud to be part of these cooperative efforts”

Naval Group has strong ties with Egypt. In the context of the modernization of the Egyptian navy’s vessels, Naval Group supplied the Egyptian Navy by adding to their fleet a FREMM (June 2015) and two LHD (June and September 2016). In 2014, Egypt ordered four Gowind corvettes to be manufactured through technology transfer. In December 2018, Naval Group created an Egyptian subsidiary, located in Alexandria Shipyard and dedicated to the in service support of the seven Naval Group vessels.

This program demonstrates that a civilian shipyard has the capacity to obtain complex military qualifications through technology transfers supervised by local Naval group teams. The French company demonstrated its know-how and its ability to transfer it at a time when a similar program is due to take place in Romania and when the French company is looking at other potential markets.

Egypt no longer intends to lift the option for a fifth and sixth corvette. Discussions conducted since 2018 by German naval shipbuilding company TKMS and approved in April 2019 by the Bundestag’s Budgets Committee have resulted in an agreement worth 2.3 billion euros for six MEKO A-200 frigates. In addition, since the end of 2019, Italian shipbuilder Fincantieri is rumored to have won an agreement to sell Italian Navy FREMM Frigates Spartaco Schergat and Emilio Bianchi while two new FREMMs would be be assembled. As of today, there are no indications whether these two programs are complementary or in competition with each other.

Posted by : Thibault Lamidel
Thibault is based in Paris, France. He holds a Law degree from University of Western Brittany (Brest) and a master in International Relations and Political science from Jean Moulin University (Lyon). He regularly covers historical and current naval matters on his blog (Le Fauteuil de Colbert) and spent a year in the French Navy.