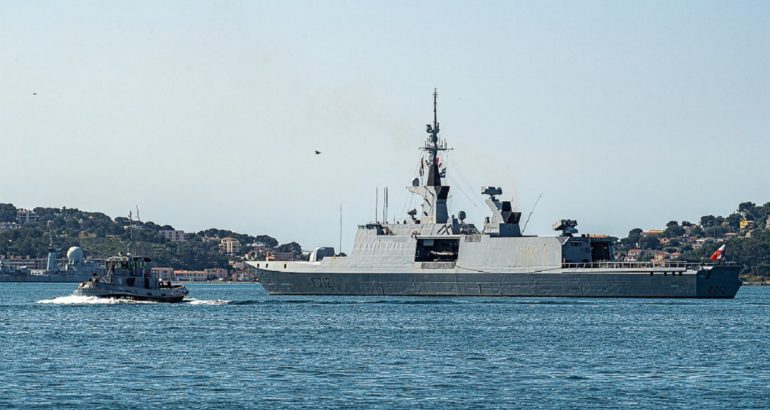 French Navy (Marine Nationale) frigate Courbet, left the port of Toulon as flagship to NATO’s Operation Sea Guardian (OSG) Focused Patrol on 28 May, 2020. The Task Group is composed of FS Courbet and Italian Navy (Marina Militare) FREMM ITS Carabiniere, who participate in this OSG Focused Patrol as part of the multinational force EUROMARFOR.

The European Maritime Force (EUROMARFOR) is a non-standing, multinational military force created by France, Italy, Spain and Portugal and can be employed within the framework of other international organizations such as the UN, NATO, OSCE or other multinational coalitions as long as the four partner nations agree.

This is the second time, after the participation in Op Active Endeavour in 2002, that EUROMARFOR has contributed its assets to a NATO Operation. And, it is the 1st time EUROMARFOR is committed directly under NATO command. This is one example of building greater synergies between NATO and other international organizations, in order to reinforce maritime security, especially in the Mediterranean.

Operation Sea Guardian is a non-Article 5 Maritime Security Operation, working with Mediterranean stakeholders to deter and counter terrorism, project stability and mitigate the risk of other threats to security for NATO Allies and partners in the Mediterranean Sea and its surrounding area. OSG has three core missions: maritime situational awareness, counter-terrorism and capacity building.

To ensure the safety of the staff and crews, and following NATO’s preventive measures for minimizing COVID-19 risk, Task Group representatives were briefed via teleconferencing while still at their home ports. They received briefings on the mission specifics, including maritime security operations, command and control as well as intelligence gathering, logistics, legal, strategic communications and several others.