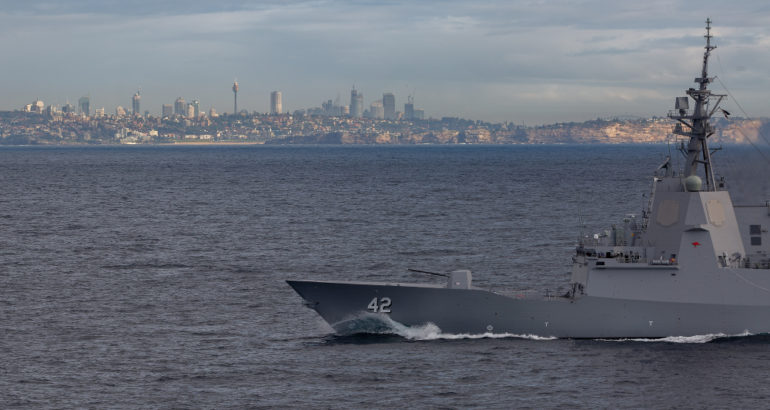 HMAS Sydney off the NSW coast during her commissioning ceremony. RAN picture.

The Royal Australian Navy has welcomed its final Hobart-class Air Warfare Destroyer, HMAS Sydney, in its fleet. The commissioning ceremony was conducted at sea, off the coast of New South Wales on Monday, on 18 May 2020.

Chief of Navy, Vice Admiral Michael Noonan, and Commander of the Australian Fleet, Rear Admiral Jonathan Mead, were aboard the guided missile destroyer, to officially welcome Sydney into service.

Vice Admiral Noonan told the commissioning crew that Sydney’s history was of a legendary pedigree:

“You will all form part of the HMAS Sydney fabric. You are sailors and officers who will all continue the proud Sydney legacy. It is a great responsibility – one I know each and every one of you is capable of honouring and carrying forward into the future. HMAS Sydney, welcome home, welcome back to our Fleet. Your name once again takes pride and its rightful place in Her Majesty’s Fleet,”

During the ceremony the ship received a blessing and Sydney’s Commanding Officer, Commander Edward Seymour, read the ship’s commissioning order before the Australian White Ensign was hoisted, signifying completion of the commissioning.

“It isn’t often in a naval career that you are part of commissioning a brand new warship, but to do so at sea and carrying the significant legacy behind the name Sydney, is a special feeling for the entire ship’s company. A lot of hard teamwork has led us to this moment of bringing a world-class warship into the fleet and we’re eager to now prove what Sydney can do. She brings an outstanding, Australian-built air warfare capability over an exceptional range and gives Navy a surface combat capability like never before.”

Sydney is the last of three Hobart-class destroyers built for the Royal Australian Navy at Osborne in South Australia and is based on the Navantia F100 frigate design.

About the future HMAS Sydney

HMAS Sydney (V) is the final of three ships of the Hobart class guided missile destroyers. Her sister ships will be HMAS Hobart (III) and HMAS Brisbane (III). The keel of Sydney was laid down on 19 November 2015 and launched on 19 May 2018 in Osborne, South Australia.

The Hobart-class is based on the Navantia designed F100 frigate and is coupled it with the Aegis Combat System. All three destroyers of the class were constructed in Australia by the Air Warfare Destroyer Alliance.

Sydney provides air defence for accompanying ships in addition to land forces and infrastructure in coastal areas, and for self-protection against missiles and aircraft. The Aegis Combat System incorporating the state-of-the-art phased array radar, AN/SPY 1D(V), in combination with the SM-2 missile, provides an advanced air defence system capable of engaging enemy aircraft and missiles at ranges in excess of 150km.