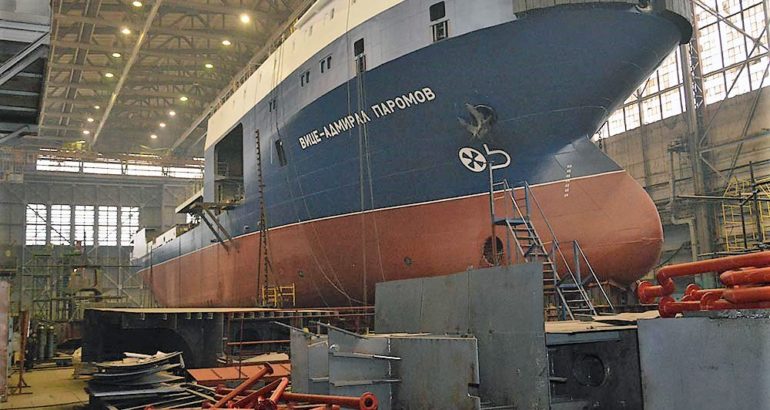 The small marine tanker Vice-Admiral Paromov, project 03182, being built for the Russian Navy at the Volga Shipbuilding Plant in Nizhny Novgorod. File picture from December 2018.

The Black Sea fleet will be the first to obtain the Vice Admiral Paromov first tanker of project 03182.

It can sail in very bad weather and pump fuel and oil to warships and transfer cargoes. The tanker can engage in rescue operations, search for and overhaul and tow distressed ships. Experts believe the universal tankers will expand the capabilities of the Black Sea fleet, the Izvestia daily writes.

The Navy is forming the crew for the Vice Admiral Paromov. It is expected to join the fleet in 2020, however a delay is possible. In this case, the St. Andrew’s flag will be hoisted in early 2021, Defense Ministry sources said.

Expert Dmitry Boltenkov believes the tankers will expand the capabilities of the Black Sea fleet.

“Any group of warships is accompanied by a tug and tanker. The latter supplies fuel, oil, spare parts and food. The tug tows a warship in case of breakdown. Project 03182 tankers are universal. They can easily cope with the missions performed by two vessels at present. They can extinguish fire and participate in search and patrol operations,”.

Former Navy Chief-of-Staff Admiral Valentin Selivanov is convinced the new tankers will be mostly used in the Mediterranean Sea.

“The Soviet Mediterranean squadron had four tankers to fuel warships and diesel submarines. It is not always possible to obtain the necessary fuel in a foreign port. Besides, the power plants are adapted to domestic diesel fuel or black oil. There is a danger that foreign ports may not let Russian warships in. A tanker is necessary in this case,”.

The Russian Defense Ministry contracted four small tankers of project 03182 in 2014-2015. The first two vessels are being built in Nizhny Novgorod for the Black Sea fleet. Another two are under construction in Vladivostok for the Pacific fleet. The Vice Admiral Paromov lead tanker was laid on September 1, 2016.

The ships are universal and can engage in a broad range of missions. They transport liquid and dry cargo and passengers. They can pump fuel and oil to ships in open sea and load major cargoes in barrels, boxes, and containers. The tanker can withdraw any garbage from a warship, as well as liquid waste, including oil polluted water. It can ensure transport operations in seaports.

The new tanker can independently patrol navigation areas which are dangerous because of bad weather. It can engage in rescue duties in fishing areas, offshore oil and gas deposits and enjoy air support, as it has a helipad for Ka-27 in the stern. The tanker can carry several drones for reconnaissance in a radius of several dozen or hundreds of kilometers depending on the model.

In an emergency, the tanker can rescue distressed seafarers. It can heave off a vessel, pump out water and tow it to a nearby port. The tanker has pumps and water jets to extinguish fire.

The tanker is not big and has a displacement of 3500 tons. It is 75 meters long and 15.4 meters wide and enjoys good seaworthiness. The crew comprises 24 men and at least another eight people can be accommodated.

The Navy is paying much attention to logistical provision. The Black Sea fleet engages all coastal infrastructure for the purpose ranging from berths and workshops to arsenals, the Izvestia said.