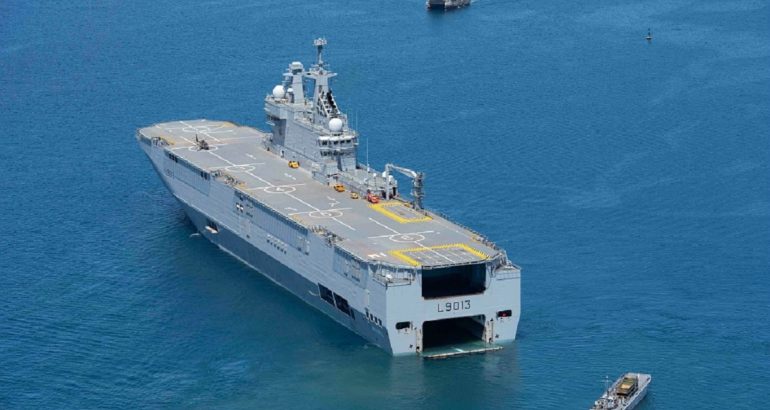 The French Navy (Marine Nationale) LHD Mistral and frigate Guépratte, have joined Operation ATALANTA. The mission aims at strengthening maritime security and combat pricay in the Gulf of Aden and Indian Ocean.

The two vessels, forming the “Jeanne d’Arc” group set sails from Mayotte on May 13. 2020 where they were involved in a COVID-19 relief mission. “Jeanne d’Arc” is an annual and scheduled operation of the French Navy which completes the training of naval officers graduating from the famous “Ecole Navale”.

In addition to the maritime surveillance or reconnaissance missions carried out by an Alouette III of the French Navy’s 22S squardon and two Gazelles of the French Army’s 3rd Combat Helicopter Regiment deployed on board the Mistral, the “Jeanne d’Arc” Group patrols daily off the coast of Somalia and provides maritime traffic surveillance under the command of Operation ATALANTA.

This integration into ATALANTA enables the 138 student officers on board the two units of the Jeanne d’Arc Group to discover how a naval force is constituted within an international operation. Some of them take a direct part in the actions carried out by integrating the watch teams on the navigation bridge, the aviation bridge or the operations centre.

Launched by the European Union on December 8. 2008, Operation ATALANTA aims to combat piracy activities in the western Indian Ocean, which is a concentration of strategic maritime routes. The contributing countries are working to deter, prevent and repress acts of piracy and armed robbery. This operation, which is the European Union’s first naval operation, is part of the European Security and Defence Policy.