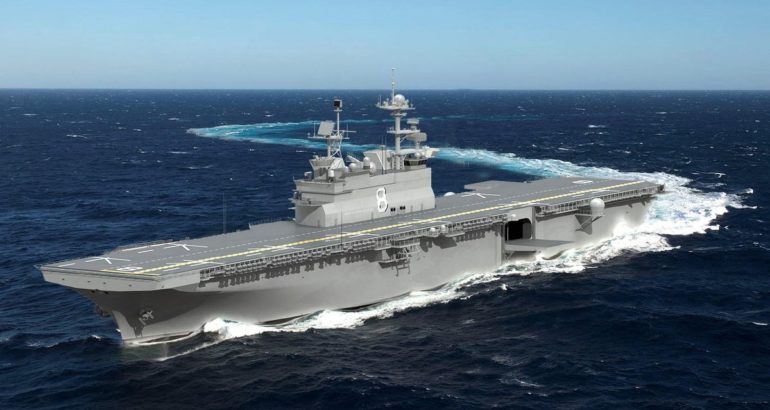 “This contract allows us to maintain the health of our critical nationwide shipbuilding supplier base while continuing our serial production of large-deck amphibs,”.

“We will work closely with our Navy-Marine Corps partners and our suppliers across the U.S. to build another highly capable, versatile and survivable warship.”

Ingalls is currently the sole builder of large-deck amphibious ships for the Navy. The shipyard delivered its first amphibious assault ship, the Iwo Jima-class USS Tripoli (LPH 10), in 1966. Ingalls has since built five Tarawa-class (LHA 1) ships, eight Wasp-class (LHD 1) ships and the first in a new class of amphibious assault ships, America (LHA 6), in 2014. The second ship in that class, Tripoli (LHA 7), was delivered to the Navy earlier this year. Bougainville (LHA 8) is currently under construction.

The America-class is a class of 45,000 tons landing helicopter assault (LHA) type amphibious assault ship meant to replace the Tarawa-class able to carry carry 1060 crew members with an embarkation up to 1650 Marines. Eleven America-class ships are planned.

The first two ships in the class have no well deck for amphibious warfare, they are dedicated to air operations. The next five will feature a well deck, allowing the operation of landing craft such as LCAC (Landing Craft Air Cushion) and LCU (Landing Craft Utility) but slightly reducing the space for aircraft on board.