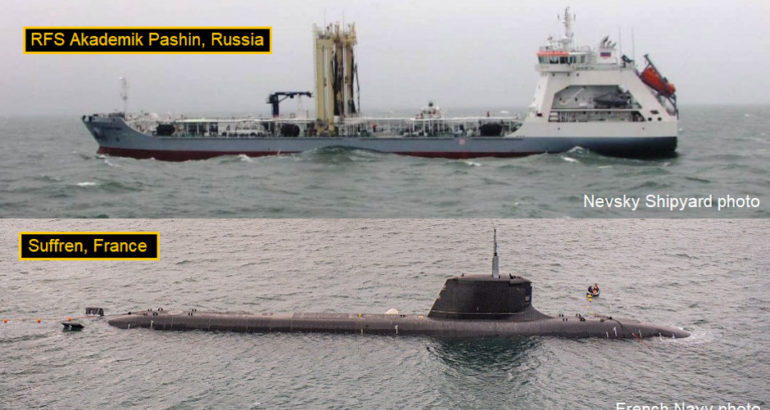 The Russian ship Akademik Pashin (upper) has been off the French coast near Cherboug, where Suffren has been undergoing trials.

When the Marine Nationale’s latest submarine, Suffren (Q284) conducted its first test dives it grabbed headlines. What went largely unnoticed by the world was that a Russian ship had been loitering in the area. RFS Akademik Pashin (IMO: 9778193) is a Project 23130 replenishment tanker.

The presence of the Russian ship, just east of Cherbourg where the submarine is currently based, was observed by Open Source analysts. Yet the connection to the submarine tests was only made by a local print newspaper, La Manche Libre who published an article in its printed edition on May 2.

The Russian ship did not go unnoticed to the Navy however. Akademik Pashin was monitored by French and then British warships. The Royal Navy reported on April 30 that the Offshore patrol Vessel HMS Mersey had shadowed the ship, along with the Steregushchiy-class corvette RFS Boiky.

The Akademik Pashin is one of the newest vessels in the Russian Navy, only being commissioned on January 21 this year. She is a replenishment oiler, carrying fuel oil, diesel, aviation kerosene, lubricating oil, water, food and spare parts. She is 5,000 empty and 12,000 tons fully laden. Her potential second role, as an intelligence gathering ship, is not confirmed. All naval vessels have a potential to gather intelligence if they are in the right place at the right time.

The Russian vessel arrived off the coast of France around April 16, taking up position in The Bay of Seine just outside French waters. She was in company with Nikolay Chiker (IMO 8613334), a Project 5757 ocean going rescue tug. This is a usual haunt for Russian warships and auxiliaries but always gets attention. Akademik Pashin had last been there in late March when she’d rendezvoused with the GUGI ‘research ship’ Yantar:

According to local media, Suffren emerged from the protection of Cherbourg on the Morning of April 27. Naval News previously reported that the trials were supposed to start in March but, according to information at the time, had been delayed due to COVID-19 restrictions. We now know, from Open Sources, that the Russian ship got underway from the Bay of Seine at 2000 Zulu on April 26, the night before Suffren put to sea. So there may now be speculation that the delay in the trials may have been influenced by the presence of the Russian ship(s).

Akademik Pashin passed the Dover Strait in the morning of April 27 at around 13 knots, escorted by HMS Mersey. Her reported destination was Murmansk.