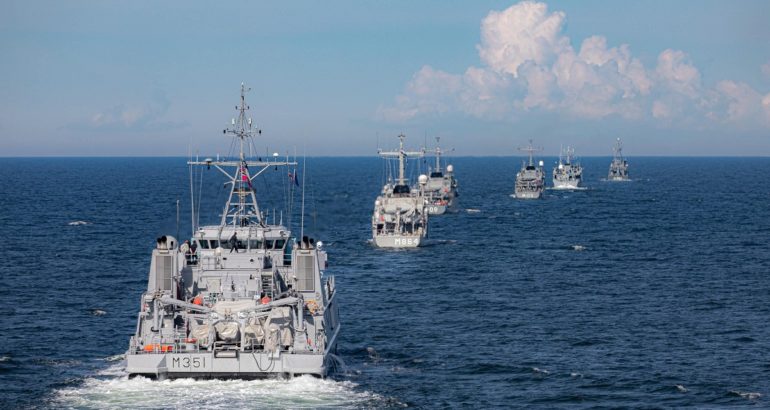 NATO Participates in Exercise “Open Spirit” in the Baltic Sea

Standing NATO Mine Countermeasures Group 1 (SNMCMG1) and Baltic Naval Squadron have during the two last week cooperated in making the Irbe Straight safer for modern seafarers. In total, 32 mines were neutralized during exercise “Open Spirit 2020”.

SNMCMG1 continues its Baltic Sea deployment and has for the last weeks taken part in exercise “Open Spirit 2020”. The exercise focused on Naval Mine Warfare, and its main objective is to remove historical ordnances from the seabed. The exercise gathered in total ten ships from five nations.

In total the task group investigated 642 mine-like objects. Some were actual historical mine ordinances and 32 were neutralised. The destruction of these mines ensures that they no longer pose a threat to modern seafarers. In total an area of 25 square nautical miles was covered.

“The Baltic Sea is of high strategic importance for NATO and its partner nations, and therefore also a highly prioritized area of operation,”

“Once again close cooperation between NATO and the Baltic Naval Squadron gives results. The high numbers of mines identified and countermined, even 75 years after the war, says something about the expertise and professionalism within our task group. I am proud of the numbers we report back to the Latvian Authorities”

The exercise is carried out annually, and the Baltic countries Latvia, Lithuania and Estonian take turns hosting it. This year the exercise was led by the Latvian Navy.

SNMCMG1 acted as commander task unit, and had in total six ships from Germany, Netherlands, and Norway under their command, working side by side with the other task unit, which were three Latvian navy ships and one Estonian minehunter.

Standing NATO Maritime Group 1 were in Latvian waters during the exercise, and participated into the exercise for a day. They had recently been in Finland and conducted joint training with the Finnish Navy, The Finnish Airforce and the Baltic Air Policing Program.

SNMCMG1 is currently under Norwegian command, consisting of the German Flagship FGS Donau, and the mine countermeasure vessels HNOMS Otra, HNLMS Willemstad and FGS Fulda. In addition they had FGS Datteln, FGS Weilheim and FGS Grömitz in their task unit during the exercise.