You are at :Home»News»USS America (LHA-6) Sails the South China Sea with Some Teeth 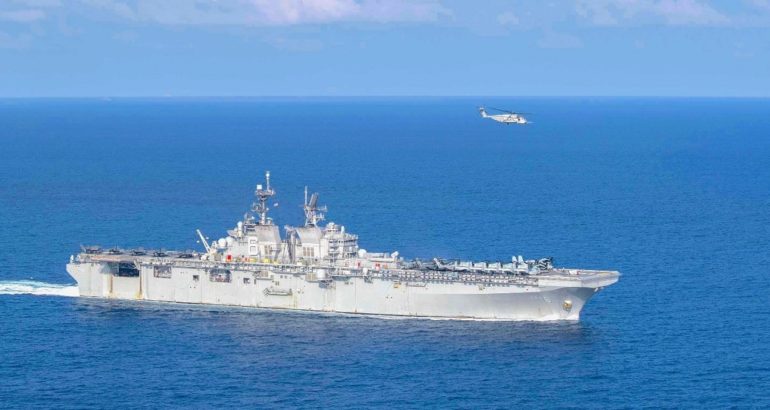 April 18, 2020, USS America sails towards the tensions off the coast of Malaysia Photo: US Navy

Tensions could bring out the “Beast” in the USMC F-35B

Tension are deescalating in mid-May 2020 in the South China Sea with the withdraw of Chinese and Malaysian ships over a maritime dispute regarding oceanic mineral and oil reserves claimed by Malaysia, China, and Vietnam. The U.S. Navy responded by sending warships in late April: the USS America (LHA-6) and its escorts USS Bunker Hill (CG-52) and USS Barry (DDG-52).

Meanwhile, two Pacific Fleet Nimitz-class nuclear-powered aircraft carriers in the region were not actively patrolling—the USS Ronald Reagan (CVN-76) was homeported in Yokosuka, Japan, and the USS Theodore Roosevelt (CVN-71) was sidelined off Guam due to COVID-19 cases aboard. Therefore, these smaller U.S. Navy ships proved very useful since no active “large deck” U.S. Navy (USN) nuclear-powered aircraft carrier was patrolling the Pacific Ocean as of mid-April to mid-May 2020.

In the April 18, 2020 photo at the top, USS America appears to carry the standard United States Marines (USMC) Aviation Element of 12 MV-22B tiltrotor transports, six Short Vertical Take-off and Landing (STOVL) F-35B Stealth Fighters, four CH-53K heavy cargo transport helicopters, seven AH-1Z/UH-1Y attack/utility helicopters, and two Navy MH-60S for air-sea rescue. However, the USMC have slotted 14 F-35Bs aboard (usually even numbered pairs as every F-35B pilot has a wingman) as a trial “Lightning Carrier” concept back in October 2019. USS America, built without an internal well deck, could operate upwards of 20-24 F-35Bs and two MH-60s if the V-22 tiltrotor and CH-53 cargo and AH-1Z attack helicopter squadrons are removed.

The small complement of six USMC F-35Bs could be enhanced and “Force Multiplied” if some or all of the F-35Bs use optional “Beast Mode” configuration. Each USMC F-35B stealth fighter aboard the USS America can operate in two versions, “Stealth Mode” and “Beast Mode.” Since the F-35B is essentially a sensor with data networking and linking capabilities (thus its own miniature AWACS), “Stealth Mode” is advantageous for stealthy Command, Control, Communications Computers, Cyber, Intelligence, Surveillance, and Reconnaissance (C5SIR) missions and usually comes armed with only four internally-carried AIM-120 Advanced Medium-Ranged Air-to-Air Missiles (AMRAAMs).

Optional “Beast Mode” forgoes the stealth shape and adds non-stealthy external weapons pylons to hang ordnance under the wings. In “Full Configuration Beast Mode,” 14 AIM-120s and two AIM-9Xs can be carried for a total of 16 Air-to-Air Missiles (AAMs) for a single U.S. Air Force F-35A or a U.S. Navy F-35C, which is mighty impressive ordnance capacity for a single-engine stealth fighter, (or 32 AAMs for a flight of two F-35A/Cs).

An Air-to-Air weapons loadout of eight AIM-120s AMRAAMs and two AIM-9X Sidewinders is possible when using internal and external weapons stations on a single USMC F-35B. Multiply 10 AAMs per F-35B by six F-35Bs on board, and the USS America’s small F-35B Air Wing can haul 60 AAMs both internally and externally, creating a formidable Anti-Aircraft capability for such a small LHA Air Wing (compared to just 24 AAMs carried internally by six F-35Bs in “Stealth Mode”). If all six USMC F-35Bs were converted to “Beast Mode” with 60 AAMs, that would provide two-and-a-half times the Anti-aircraft missiles compared to all six F-35Bs operating without underwing mounted pylons for 24 internally-carred AAMs.

The latest AIM-120D version has a range in excess of 100-plus miles whereas the newest generation AIM-9X Sidewinder with thrust-vectoring tailfins has a range of around 26 miles.

Posted by : Peter Ong
Peter Ong is a Freelance Writer based in California, USA with a Bachelor's Degree in Technical Writing/Graphic Design and a Master's Degree in Business. He writes for Defense, maritime, and Emergency Vehicle publications and also for product and travel reviews and blog websites.