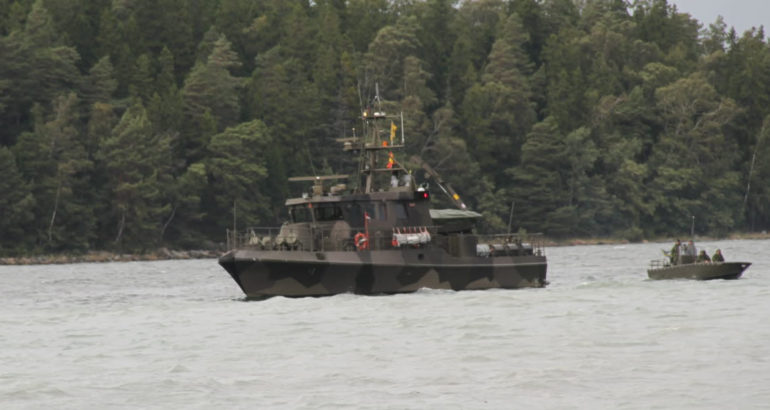 With 22 meters in length and a displacement of 62 tons, the Tapper-class Fast Patrol Boats operate in extremely shallow water. (Credits: Swedish Armed Forces)

The first of six Tapper-class (Bevakningsbåt 80) patrol boats, HMS Dristig, has been re-delivered to the Swedish Navy (Svenska marinen) following a comprehensive overhaul and upgrade program. This is part of a project aimed at enhancing Sweden's underwater surveillance and protection capabilities.

Following the intelligence incident in the Stockholm archipelago in June 2014, the need to regain submarine identification capabilities was identified. Until about 15 years ago, four hydrophone buoys were fulfilling this task but they disappeared from the Swedish armed forces portfolio.

The Swedish Navy was therefore given the mission of adapting six Tapper-class patrol boats by integrating sonar buoys that transmit the sound from its senors to the ship. The sound image can then be analyzed to detect any potential underwater threat.

The six vessels are divided between the Third and Fourth Naval Warfare Flotillas with three vessels each. « I have operated the ship in her old role in maritime surveillance for two different periods. But it will now be fun to rebuild the passive submarine hunting ability. We will start next week with the training of the crew », said the HMS Dristig commander, Jonas Fäldt.

The ship has been rebuilt and adapted for its new task and, among other things, main machines and auxiliary machines have been replaced. The big news, of course, is the ability to receive, listen and analyze underwater sounds via the sonobuoy.

« It feels good to receive the ship. She is part of a clear political order focusing on increasing the Swedish Armed Forces’ ability to detect underwater threats », stated Commander Per Edling, head of the Third Naval Warfare Flotilla.

In July 2015 Kongsberg Maritime won a contract to supply new sonar systems as part of a major rebuild and lifetime extension of five vessels in the class conducted by Swede Ship Marine. With 22 meters in length and a displacement of 62 tons, the Tapper-class Fast Patrol Boats operate in extremely shallow water, and require sonars capable of high performance in such environments. The Kongsberg Maritime sonar selected for this upgrade is being used for Anti-Submarine Warfare (ASW), Mine and Obstacle detection and Navigation, and is designed for use in shallow water.