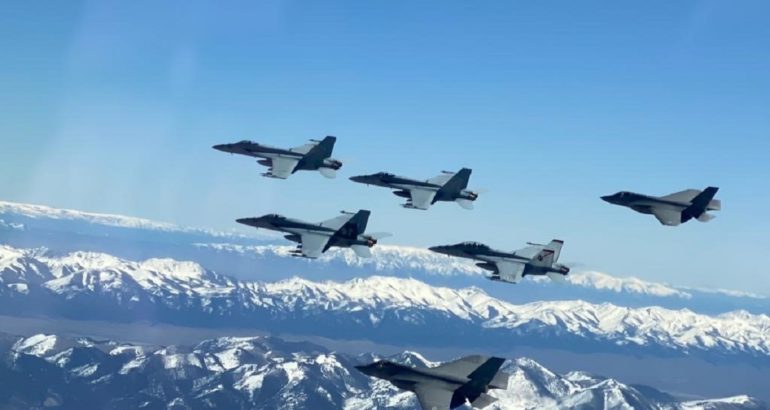 Pilots from Strike Fighter Squadron (VFA) 125 and VFA-147 are the first TOPGUN students to complete the course in the F-35C Lightning II. U.S. Navy photo.

Pilots from Strike Fighter Squadron (VFA) 125 “Rough Raiders” and VFA-147 “Argonauts” were the first TOPGUN students to complete the course in the F-35C Lightning II.

Maj. Derek Heinz from the Rough Raiders and Lt. William Goodwin, III from the Argonauts successfully completed the 13-week Navy Strike Fighter Tactics Instructor (SFTI) course at the Naval Aviation Warfighting Development Center (NAWDC) at Naval Air Station Fallon, Nev.  The SFTI course, otherwise known as TOPGUN, is an individual-level training course loaded with classroom lectures and labs, as well as simulated and live-fly events that are focused on the newest advanced tactical recommendations, and designed to create newly-minted tactics instructors who are ready to return and train the Fleet.

“Our focus on the students that go through TOPGUN is not limited to teaching them the tactics, techniques, and procedures that are required for them to successfully employ their aircraft, integrated into a larger force,”

“We are also in the business of teaching our graduates how to instruct other students so that when they go back to the Fleet, they are able to instruct at a very high level.”

For the last few years, NAWDC and TOPGUN have been working to develop the skill-sets, curriculum, and experienced instructors required to execute a syllabus that fully integrates F-35C tactics, techniques, and procedures.  While all F-35C tactics instructors have completed the TOPGUN course previously, this is the first time TOPGUN has graduated students who are currently flying the Lightning II, utilizing a syllabus that has been developed, from the ground up, specifically for F-35C integrated operations.  This was accomplished by the gradual introduction of F-35C tactics into the training curriculum for previous classes.  The result is a cadre of highly-trained instructors executing a fully-integrated F-35C syllabus, providing well-rounded “graduate-level” training for the fifth-generation fighter to take back to the Fleet.

“Graduating Strike Fighter Tactics Instructors allows us to accelerate learning by feeding TOPGUN training back to the Fleet, elevating the lethality and survivability of both the individual aircraft as well as the Carrier Strike Group,”

“The Lightning II proved its value to the Navy during every phase of the TOPGUN course, and its integration with the F/A-18E/F Super Hornet, E/A-18G Growler and E-2C/D Hawkeye demonstrated that the powerful combination of 4th and 5th generation fighters, with advanced electronic attack, and command and control, is a force-multiplier against advanced threats.”

Since completing the TOPGUN course last month, Heinz and Goodwin have returned to instruct and train the Fleet in the latest TOPGUN tactics, techniques and procedures, with a particular emphasis on ensuring that pilots will have the requisite skillsets to effectively employ the Lightning II during its first operational deployment and beyond.

“Our focus is on assisting the SFTIs at the operational Fleet squadron pushing the big picture tactics and ensuring that everything is ready to go for the first and subsequent F-35C carrier deployments,”

“The idea is that VFA-147 SFTIs can use the standards of tactical execution we provide to train their own people and take that knowledge with them through deployment.  We are here to ensure that they are set up for success.”

“While my role as an F-35C instructor is still primarily focused on the students at the FRS, my perspective on what I teach and how I teach it most certainly has grown since completing TOPGUN”

“I’m still training students to fly the aircraft, it’s just now I have the additional responsibility as an SFTI to bring that advanced training to the Fleet, while helping maintain the TOPGUN training syllabus and ensuring standardization of training for all instructors.  We are always working to maintain the highest standards of training.”

This milestone is the latest feather in the cap for the U.S. Navy’s F-35C program.  Since the stand-up of Commander, Joint Strike Fighter Wing in August 2018, the program has declared Safe-for-Flight Operations Certification (SFFOC) for both VFA-147 “Argonauts” and VMFA-314 “Black Knights.”  In February 2019, the Navy and Marine Corps both declared Initial Operational Capability (IOC) for the F-35C and VFA-125, the F-35C fleet replacement squadron (FRS), graduated its first newly-winged F-35C aviators.  In May 2019, VFA-101 “Grim Reapers” was deactivated, consolidating most of its resources at NAS Lemoore. Additionally, both VFA-147 and VFA-125 continue to meet program requirements, pass inspections, and receive certifications while continuously participating in numerous detachments both ashore and at sea.

“This tremendous accomplishment is yet another step for the F-35C community as we continue to focus on delivering this game-changing aircraft to the Fleet.  The graduates of the first F-35C TOPGUN class are back in Lemoore instructing VFA-147 in the latest tactics that will, in turn, be brought to the fight during Carrier Air Wing Two’s first deployment with the Navy’s Joint Strike Fighter,”

“Additionally, the tactics that were developed during this first F-35C class are currently being integrated into the carrier air wing’s work-up cycle, truly making them a more lethal, Carrier and Air Wing of the future.”