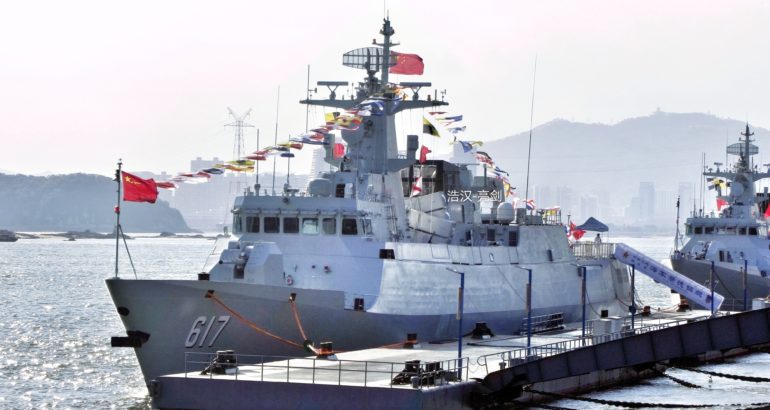 China Commissioned its Ninth Type 056 Corvette So Far in 2020

On June 17, 2020, a commissioning ceremony was held for the new corvette Type 056A "Jingdezhen" at the PLAN Naval Base in Xiamen (Fujiang Province).

In total, nine Type 056 corvettes have joined the People Liberation Army Navy (PLAN) since the beginning of 2020. The “Jingdezhen” (617) was admitted to active service in the PLAN East Sea Fleet and assigned to the 16th fleet based in Xiamen.

The PLAN reportedly has plans to build up to 70 Type 056 and 56A corvettes, but has apparently reduced its target to focus more on larger vessels. The construction of Project 056 corvette began in 2012, and is one of the largest fleet in the PLAN. Last year, China launched its 60th Type 056 corvette.

Construction of this type of corvettes is simultaneously underway at four shipyards: Hudong-Zhonghua in Shanghai, Huangpu Shipyard in Guangzhou, Liaonan Shipyard in Dalian, Wuchang Shipyard in Wuhan.

The last corvette commissionned is a variant of called Type 056A specialized in anti-submarine warfare and easily distinguishable thanks to its large opening at the stern for a towed sonar.

The vessel, measuring 88.9 meters in length and 11.14 meters in draft, displaces 1,370 tons full load. Its CODAD propulsion system allows the ship to sail in excess of 25 knots, with an economic endurance of 2,000 nautical miles and a crew of 67 sailors.

On the combat systems side, the ship is fitted with an anti-submarine warfare (ASW) combat and communication suite, ASROC missiles, anti-submarine grenades, light torpedoes and a towed sonar, as well as a H/PJ-26 76mm main gun, two H PJ-17 30mm CIWS and one eight-tube HQ-10 missile launcher.

This class of corvette, designed for the protection of China’s littorals and exclusive economic zones despite its relatively small size, is the first to be fitted with the modified version of the ZKJ-5 combat and command system. This CMS can be integrated with other command systems of the PLAN, turning the Type 056A into one of the information and combat unit nodes in the “System”. They are replacing several types of patrol ships like the Type 053H “Jiangsu I”.

The procurement cost of a Type 056A corvette is more than 700 million yuan (about $102 million USD) at today’s exchange rate, slightly more expensive than the baseline version of the corvette, the Type 056.