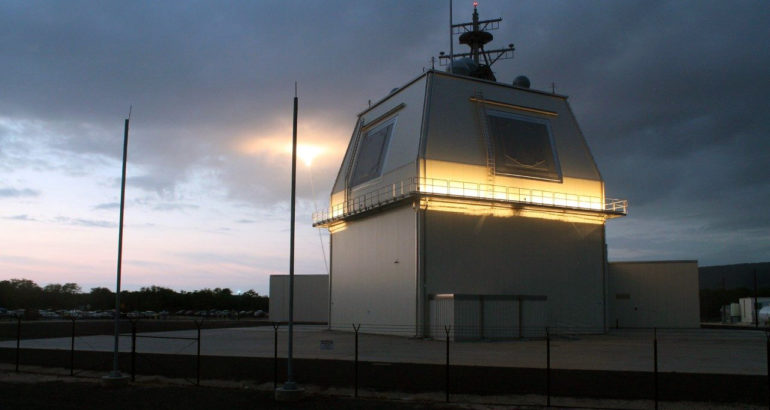 The Japanese Ministry of Defense (MOD) announced this week its intention to halt deployment of the Aegis Ashore missile defense system citing difficulties in ensuring that rocket boosters from the interceptors do not fall in populated areas. The real reason may actually have to do with the radar system, namely SPY-6 and SPY-7. Yoshihiro Inaba has the story.

At a special press conference held at the MOD in Tokyo on Monday, June 15, Defense Minister Taro Kono announced the suspension of plans to deploy the Aegis Ashore, which will be operated by the Japan Ground Self-Defense Force (JGSDF).

In December 2017, the Japanese government decided to deploy the Aegis Ashore in response to the threat posed by North Korea’s repeated ballistic missile launches. It was also intended to ease the burden on the JMSDF, since the JMSDF’s Aegis destroyers were constantly deployed in the Sea of Japan in response to such threat. A total of two Aegis Ashore sites were to be deployed in Akita Prefecture (in the northeastern part of Honshu) and Yamaguchi Prefecture (in the southwestern). This is in order to be able to defend the whole of Japan in light of the range of the SM-3 Block 2A interceptor missile.

Issues linked with SM-3’s Mk72 booster coming back down

The Aegis Ashore to be deployed in Yamaguchi Prefecture was to be located within the JGSDF’s exercise area, but because there are villages in the vicinity, how to safely drop the SM-3’s Mk72 booster was a problem. Therefore, the MOD explained that the SM-3’s direction of flight would be controlled to drop the Mk72 inside the JGSDF’s exercise area, taking into account the wind direction and other factors.However, according to Kono’s explanation at the press conference, there were technical challenges to dropping the Mk72 inside the exercise area, and the SM-3 itself would need to be refurbished in order to solve them, so the cost and duration of the refurbishment led to the decision to suspend the deployment of the Aegis Ashore.

However, if the Mk72 booster was the only issue, MOD could have taken steps, such as deploying only the Vertical Launch System (VLS) of the Aegis Ashore component to a more remote area along the coast where it would be safer, or evacuating the population in advance of launching the SM-3, and thus this cannot be the only reason for suspending the deployment of the Aegis Ashore.

The other possible reason is the expansion of Aegis Ashore’s capabilities. Originally, Aegis Ashore was considered to be equipped with the ability to intercept cruise missiles as well as ballistic missiles. However, due to the rising costs of Aegis Ashore (especially the radar), the addition of this feature was abandoned. In addition, China currently has a hypersonic glide weapon called the DF-17, which Japan within its range. Therefore, Japan is also forced to seriously consider how to deal with these hypersonic glide weapons. So, it is quite possible that the process could be restarted again after suspending plans to deploy Aegis Ashore, which at present can only deal with ballistic missiles, and re-examining the plan to deal with these other threats as well. For example, this could include equipping SM-6 to intercept cruise missiles, or other solutions.

The radar fitted to the Aegis Ashore system could also be reconsidered. The MOD conducted a competition between Raytheon’s AN/SPY-6 and Lockheed Martin’s AN/SPY-7(V)1 (formerly known as LMSSR) for the Aegis Ashore radar and the SPY-7 was selected as the result. During the debate in the Japanese Diet, MOD explained that the SPY-6 was proposed in combination with Aegis Baseline 10 while the SPY-7 was proposed in combination with Aegis Baseline 9. Furthermore, the SPY-7 was at a distinct disadvantage compared to the SPY-6, which had already been selected for use in the U.S. Navy’s Arleigh Burke Class Destroyer Flight III and was also being tested with actual radar. Despite this, the MOD’s selection of SPY-7 was largely due to a proposal from Lockheed Martin for a Japanese company to participate in the production of some component such as a gallium nitride (GaN), which is used in the AESA radar of SPY-7, according to a report in 2018 by Japanese newspaper Sankei Shimbun. In the end, however, Japanese companies were not allowed to participate because they did not have a sufficient production base, which would have delayed delivery.

This led some Japanese politicians to suggest that the SPY-6 should be selected. For example, Akihisa Nagashima, one of Japan’s leading politicians in the security field, argued to then-Defense Minister Takeshi Iwaya in the House of Representatives on June 18, 2019, that the SPY-6 should be introduced instead of the SPY-7, given the lower cost and the cooperation with the US Navy. If that happens, the SPY-7, for which contracts have already been signed, could be operated as an early warning radar to monitor airspace in the Southwest and Pacific areas.

On June 18, Prime Minister Shinzo Abe held a press conference in Tokyo to announce that the National Security Council (NSC) will discuss in the summer of 2020 what kind of deterrent Japan should have in view of North Korea’s improving technology related to missiles. The term “deterrence” here naturally includes the issue of Aegis Ashore, but at the same time, Abe has made it clear that he wants to discuss the possession of the ability to attack enemy bases and missile launchers. Until now, discussions about such capabilities have been avoided in public because of Article 9 of Japan’s constitution, which limits the possession of military forces beyond the minimum necessary.

But now that the deployment of Aegis Ashore has suspended, JSDF is moving into a new phase. The Japan Air Self-Defense Force (JASDF) has already begun operating the F-35, which serves as an excellent sensor to seek out enemies on the ground. In addition, the JGSDF plans to operate the HVGP Block 2 hypersonic glide weapon, which, if operated in coordination with the US forces, along with other long range weapons such as the JASSM and other long range weapons the JASDF plans to operate, would be capable of attacking enemy bases and other targets.