Japan Self-Defense Forces plan to deploy a Hypervelocity Gliding Projectile, or HVGP, in fiscal year 2026 as a new weapon to deter enemies trying to invade Japan's remote islands. The HVGP (速滑空弾) could eventually have an anti-ship capability and be used against aircraft carriers.

The Hypervelocity Gliding Projectile could eventually target large surface ships such as aircraft carriers, as demonstrated in this video which Naval News obtained exclusively from ATLA, the Acquisition, Technology & Logistics Agency of the Japanese M.O.D.

The HVGP is launched from a mobile ground launcher. Once it reaches a certain altitude, the glider separates from the booster, and then glides at high altitudes at supersonic speeds while being guided by both satellites and inertial navigation system (INS). It then flies to the target point. The target is attacked from directly above at a 90° dive.

For more details on HVGP, read our recent article at this link. 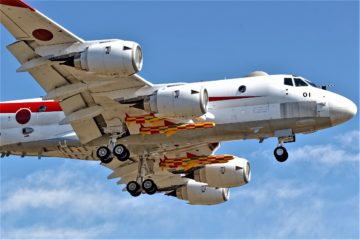