Tomorrow, Wednesday 10 June 2020, the German Navy will put into service the second of a total of four F125 class frigates, the "Nordrhein-Westfalen".

The ship will belong to the 4th frigate squadron, one of the units of the flottilla 2, and will be based at the naval base in Wilhelmshaven.

“We are delighted that the second unit of the F125 class has entered service. It is a major milestone towards full operational capability, as we now have two platforms that will enable us to conduct operational training on our own responsibility and thus make the weapon system fully available to the Navy,”

“After an intensive and successful test phase, the commissioning of the frigate ‘Nordrhein-Westfalen’ is a further milestone in the modernization of our German Navy. The crew ‘Charlie’ played a major part in this and now looks forward with excitement to the next operational training so that the immense capabilities of this modern system can finally be deployed under operational conditions,”

Among the invited guests are also the Prime Minister of the ship’s godfather country, Mr. Armin Laschet, the Parliamentary State Secretary Dr. Peter Tauber, as well as the Members of the Bundestag Siemtje Möller and Ingo Gädechens.

“The Bundeswehr embodies our liberal and well-fortified democracy and is firmly anchored here in North Rhine-Westphalia. That is why the frigate’s name is so fitting: it will be our country’s travelling ambassador on the world’s oceans, working to ensure the preservation of peace and freedom. The mission of the frigate ‘North Rhine-Westphalia’ directly serves our well-being. The sponsorship of the frigate is a matter close to my heart, which is also brought to the citizens of North Rhine-Westphalia through the ‘Freundeskreis Fregatte Nordrhein-Westfalen’. I wish the frigate a good journey at all times and always a hand’s breadth of water under the keel”,

In addition to the “Baden-Württemberg”, the “Nord Rhein-Westfalen” is also operated with a multi-crew concept. The ultra-modern yet robust technology enables intensive use with up to two years’ standing time in the operational area without a scheduled shipyard stay. Thanks to the high degree of automation, the ships can also be operated with a crew of only 120 men and women. In comparison: the “older” frigates of the German Navy require almost twice as much crew.

With the handover of the “North Rhine-Westphalia” to the German Navy, the maritime defence technology sector has impressively demonstrated its capabilities. With the F125 class frigates, the Navy gains the capabilities for long-range tactical fire support of army forces on land and for defence against asymmetric threats. The “Baden-Württemberg” class fights sea targets with the RGM-84 Harpoon naval target missiles, for example, which have a range of more than 220 km.

With the four so-called Buster boats and the onboard helicopters, each frigate has not only an extended reconnaissance and weapon range but also extensive means of transport to enable it to deploy its own special or specialised forces for rescue and evacuation, armed repatriation and operations against enemy forces. With the naval helicopters on board, they are also in a position to be integrated into a modern U-hunting network. Due to their generous embarkation capacities, the ships are also well suited for command and control.

The Navy is setting new standards with the chambers for the crew. Each chamber is specially equipped with an adjoining wet room and has an Internet connection, which enables the soldiers to stay in touch with their relatives even during longer absences. The establishment of full operational capability reaches an important milestone with the second ship of class F125 and will be systematically completed with the two subsequent ships. 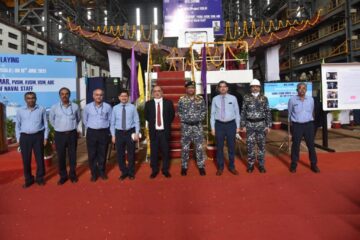