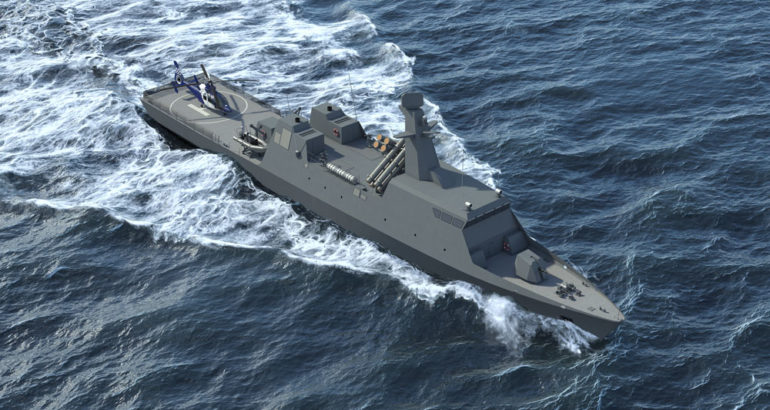 Both shipyards will be cooperating closely in the international development and promotion of the new corvette with production which would take place both in Greece and Israel. According the companies who launched a dedicated website, the Themistocles combines the knowhow of the Greek, Israeli and US shipbuilding industries and brings next-generation operational capabilities to future naval warfare.

The new design of the Themistocles Corvette brings next generation operational capabilities to future naval warfare. It is a multipurpose vessel at the length of 72 meter and full displacement of about 800 tons. This new corvette will also reach the speed of above 30kn with an extended endurance. It can operate a medium size marine helicopter, but also supports unique possibilities of deploying Special Forces units. Themistocles includes state-of-the-art weapons and electronic systems, than can be tailor-made to customer specific requirements.

For ONEX Neorion and Israel Shipyards Ltd the name “Themistocles” symbolizes the common principles, culture and the values of peoples based on the ideals of freedom, democracy and unity. Themistocles was an Athenian politician, general and naval strategist whose emphasis on naval power and military skills were instrumental during the Persian wars. Themistocles was the creator of Athenian sea power and the chief savior of Greece from subjection to the Persian Empire at the Battle of Salamis in 480 BCE.

Naval News contacted Israel Shipyards with some questions. Here are the replies:

The Hellenic Navy is looking to strengthen its maritime capabilities as soon as possible following increasing tensions with Turkey. The Greek parliament approved earlier this month several programs for the Hellenic Navy.

Greece joined the PESCO’s European Patrol Corvette – EPC Project in January this year. It seems doubtful that the country would be procuring both the EPC and the Themistocles for its future fleet. On the other hand, the potential procurement of two FDI Frigates from France is still being negotiated… while the United States have been promoting the MMSC.