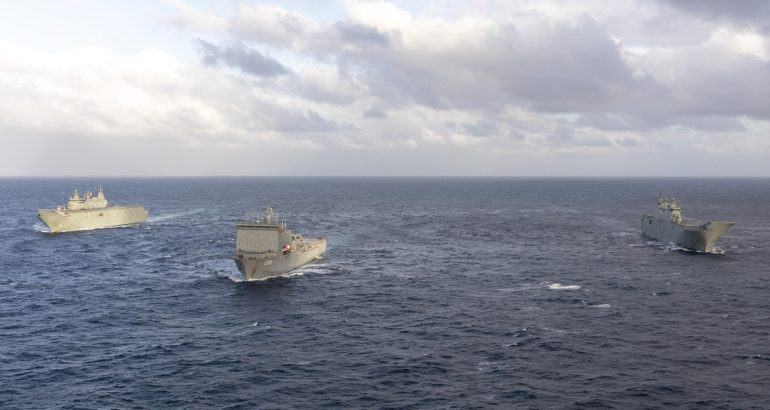 From left, HMA Ships Canberra, Choules and Adelaide sail in formation during Force Integration Training off the east coast of Australia. © Commonwealth of Australia, Department of Defence

In a first, all three amphibious vessels of the Royal Australian Navy (RAN), HMAS Canberra, HMAS Choules and HMAS Adelaide, sailed together in formation.

This was the first time that the two LHDs and the single LSD of the RAN have operated together at sea. The event occured during a Force Integration Training off the east coast of Australia. The Australian Defence Force is conducting maritime task group training off Australia’s east coast and northern waters ahead of resuming major activities in the second half of the year.

The Canberra-class Amphibious Assault Ship, also known as a Landing Helicopter Dock (LHD), provides the Australian Defence Force with one of the most capable and sophisticated air-land-sea amphibious deployment systems in the world. These 27,000 tonne ships are able to land a force of over 1,000 personnel by helicopter and water craft, along with all their weapons, ammunition, vehicles and stores.

The largest ships ever built for the Royal Australian Navy, the LHDs were built as a collaboration between Navantia and BAE Systems.

The ship’s roles are to:

HMAS Choules (L100) is a Bay-class landing ship dock (LSD) that served with the UK’s Royal Fleet Auxiliary (RFA) from 2006 to 2011, before being procured by the Royal Australian Navy.