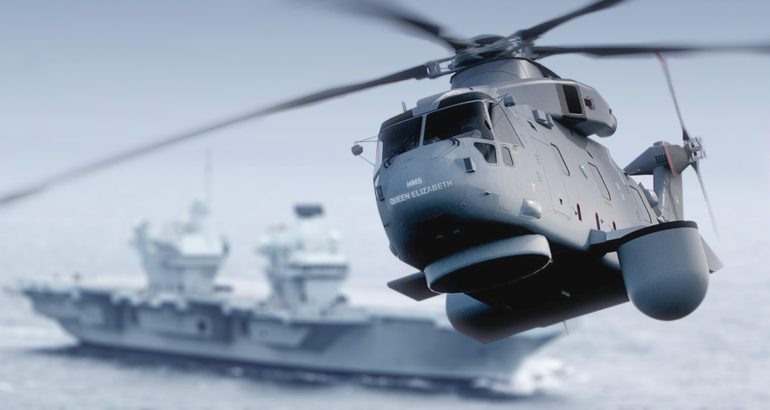 According to a report by the UK National Audit Office (NAO), on Carrier Strike, the initial operational capability (IOC) of the Royal Navy Merlin Crowsnest AEW helicopter will face an 18 month delay.

According to the NAO report issued June 26, there is an “18 months expected delay to developing the initial operating capability for the new airborne radar system, critical to protecting a carrier strike group”. The IOC is the minimum level at which the capability or service is usefully deployable.

The IOC which was initially planned for March 2020 is now expected no sooner than September 2021. The Full Operational Capability (FOC) originally set for June 2022 has now been pushed back to May 2023. HMS Queen Elizabeth will be conducting her first operational deployment next year. Known as CSG21, the deployment will see the Carrier Strike Group sail to the Mediterranean Sea, the Persian Gulf and the Pacific. The vessels will deploy with 24 F-35B jets, including US Marine Corps aircraft, in addition to a number of helicopters.

The Crowsnest kit transforms the Merlin HM.2 of the Royal Navy into an Advanced Early Warning (AEW) helicopter. Without this capability, the carrier strike group’s capabilities will be downgraded. There is a contingency plan for deploying Crowsnest helicopters during CSG21 without IOC, as an interim capability.

The new airborne radar system (Crowsnest) – which is a key part of Carrier Strike’s protection – is 18 months late. This will affect Carrier Strike’s capabilities for its first two years of operation. The delay has been caused by a subcontractor, Thales, failing to meet its contractual commitments for developing equipment and not providing sufficient information on the project’s progress. Neither MoD nor its prime contractor, Lockheed Martin, were aware of these problems until it was too late, reflecting MoD’s ineffective oversight of its contract with Lockheed Martin.

The Ministry of Defence (MOD) was informed in early 2019 by industry that there were challenges associated with the development of the mission systems of the airborne radar capability. The programme was re-baselined in the first half of 2019, which included the adoption of an incremental approach to the delivery of the capability to the Royal Navy. The MOD has worked intensively with its contractors and sub-contractors to monitor the performance of the programme and manage the schedule of remaining activity. New management systems and control measures have been implemented by contractors and additional resources have been assigned. The MOD continues to engage with industry to ensure that all issues are raised and managed at the earliest opportunity to minimise impact to the schedule. The programme remains focused on fielding an initial capability in time to support Carrier Strike Group 21.

The NAO report also brought some positive news stressing that the MoD built the two new carriers in line with its timetable and virtually on budget (the program was only 3% above the budget, but this was agreed back in 2013). However, the MoD does not know how much Carrier Strike will cost over its life. For example, it is yet to make important decisions on the enhancement of the capability over the longer-term, such as how to replace or extend the Merlin helicopters. The MoD may not have made sufficient provision in later years’ budgets for the full costs of Carrier Strike. The report also notes that development for the three new Fleet Solid Support ships, which are crucial to Carrier Strike’s operation, is making “slow progress”.

For the record, the British Ministry of Defense awarded a contract worth 269 million pounds to Lockheed Martin in January 2017 for the supply of ten Crowsnest kits for the British naval aviation. The kits are modular radar systems that may be fitted (and taken off) any of the 30 Leonardo AW101 Merlin HM.2 maritime helicopters fielded by the Royal Navy. The first Leonardo Merlin HM.2 helicopter fitted with the Crowsnest kit conducted its first flight in late March 2019 at the Leonardo Helicopters (formerly AgustaWestland) site of Yeovil.

The Merlin HM.2 helicopters equipped with this system will fly missions from British aircraft carrier Queen Elizabeth-class and are replacing Sea King ASaC.7 DRLO helicopters in the 849th Navy Aviation Squadron (which were all decommissioned in September 2018).

The developer and manufacturer of the Crowsnest system is the British branch of Lockheed Martin (Lockheed Martin UK), while Thales and Leonardo are subcontractors. Under the terms of the contract, the first Merlin HM.2 helicopter equipped with the Crowsnest kit was set to be commissioned in June 2019.

Initially, Lockheed Martin offered its own containerized Vigilance system as part of the Crowsnest program, using a multipurpose radar with AFAR based on the Northrop Grumman AN / APG-81 radar (used on the Lockheed Martin F-35 fighter) or the Israeli IAI radar placed in an external onboard container Elta EL / M-2052. This system has been tested by Lockheed Martin since the end of 2011. However, in April 2015, Lockheed Martin, joining forces with Thales, proposed a more conservative and cheaper version of the Thales solution, which was originally proposed by the latter independently. It is an upgrade of the Cerberus radar system used by the Sea King ASaC.7 helicopters with modified Thales Searchwater 2000 AEW radar with mechanical scanning. In May 2015, this “budget” decision was chosen by the UK Department of Defense.