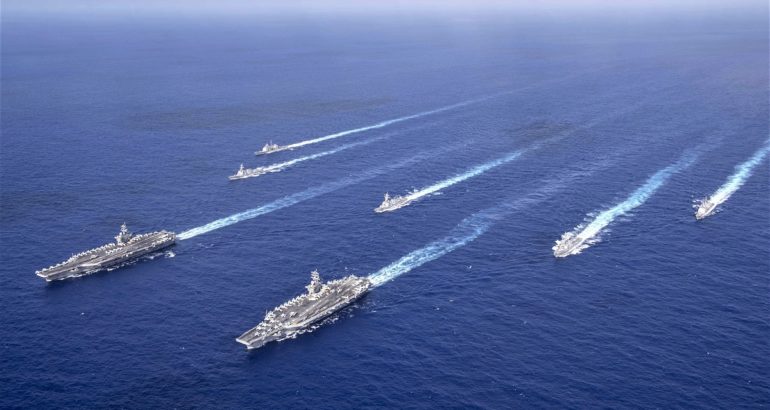 “This is a great opportunity for us to train together in a complex scenario,” said Rear Adm. Doug Verissimo, commander of Carrier Strike Group (CSG) 9. “By working together in this environment, we’re improving our tactical skills and readiness in the face of an increasingly pressurized region and COVID-19.”

As a Pacific nation and a Pacific leader, the United States has a national interest in maintaining security and prosperity, peaceful resolution of disputes, unimpeded lawful commerce, and adherence to freedom of navigation and overflight throughout the shared domains of the Indo-Pacific. For more than 75 years, the U.S. Navy has been a persistent and stabilizing presence conducting operations throughout the region on a daily basis.

“The United States Navy has long history of operating multiple carrier strike groups as a combined force in the Pacific,” said Rear Adm. James Kirk, commander of Carrier Strike Group (CSG) 11. “Our operations demonstrate the resilience and readiness of our naval force and are a powerful message of our commitment to regional security and stability as we protect the critically important rights, freedoms, and lawful uses of the sea for the benefit of all nations.”

“Working with Rear Adm. Kirk and Carrier Strike Group 11 during their deployment is a great opportunity for us to train on how we would operate multiple carrier strike groups in a contested environment,” said Verissimo. “U.S. aircraft carriers possess flexibility, endurance, firepower, maneuverability and capability unmatched in the history of warfare.”