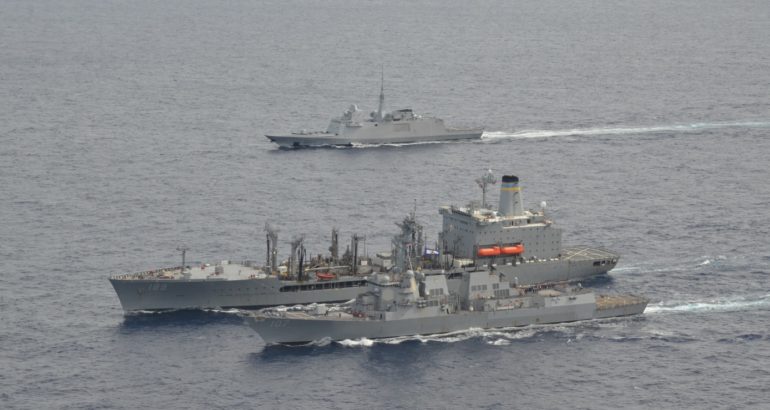 FREMM Bretagne during an ASW exercise with the U.S. Navy. French Navy picture.

The French Navy (Marine Nationale) FREMM Frigates FS Auvergne and FS Bretagne won the US Navy's "Hook'em" award. This is the second time U.S. 6th Fleet has provided the award to French ships for their ability to find and track submarines.

French Combined Task Forces (CTF) 470 and 473 and French frigates FS Bretagne (D-655) and FS Auvergne (D-654) earned the recognition through close coordination with their American counterparts during joint operations in 2020.

“I continue to be impressed by the tactical acumen and professionalism of my French maritime counterparts and their significant contribution to ASW mission objectives during our joint operations. I’m confident that our forces can seamlessly integrate, collaborate, and overcome any challenges we face in the maritime environment.”

The ASW “Hook ‘Em” award is presented quarterly to a unit supporting C6F which has demonstrated superior ASW readiness, proficiency, and operational impact.

“This recognition is a real honor for the talented crews of Auvergne and Bretagne and demonstrates the remarkable trust and interoperability established between our Navies, Fleets, and ships in all areas of operation. Anti-Submarine warfare requires years of dedicated and sustained effort to achieve a high level of competence and, more importantly, to conduct genuinely coordinated operations. As a result, our forces are ready to ‘Plug and Fight’ together. I am very proud and deeply moved by the trust our brothers-in-arms have in French units.”

The U.S. Navy and French Navy continue to build upon their strong partnership. Last week, along with 17 other NATO allies and two partner nations, the two navies participated in Baltic Operations (BALTOPS) 2020.

Vice Adm. Frederick C. Turner established the “Hook ‘Em” award in December 1975 to recognize C6F ships, submarines, and aircraft squadrons demonstrating ASW excellence. The award was discontinued two decades later, but it was reestablished by Adm. James G. Foggo III in 2016 during his tenure as C6F.

C6F, headquartered in Naples, Italy, conducts the full spectrum of joint and naval operations, often in concert with allied, and interagency partners, in order to advance U.S. national interests and security and stability in Europe and Africa.

According to the Armament General Directorate (DGA), FREMM, designed and developed by Naval Group, is a stealth, versatile and enduring surface combatant with advanced automation. Its main missions are the control of a zone of maritime operation, anti surface (ASuW) and anti submarine (ASW) warfare, precision deep strike with naval cruise missile (it is the only class of NATO vessel in Europe with the capability to launch land attack cruise missiles from surface vessels), the deployment and support of special forces…

The FREMM can deploy the Caiman Marine (NH90 NFH) maritime helicopter, with unmatched ASW capabilities thanks to its FLASH dipping sonar and MU90 torpedoes. The FREMM-Caiman combo represents a cability gap in terms of ASW. The FREMM is also equipped with the Zodiac Milpro Ecume, the new tactical boat for naval special forces.

In 2030, the French Navy will have fifteen first-line frigates including 8 FREMM, 2 air defense destroyers (Horizon-class) and 5 new generation FDI (Defense and Intervention Frigates). FREMM Normandie is the sixth in a series of eight, after Aquitaine, Provence, Languedoc, Auvergne and Bretagne. It will be followed between 2019 and 2023 by Alsace and Lorraine. The last two FREMMs will have enhanced air defense capabilities (FREMM DA).

Heavily armed, the Normandie FREMM deploys the most effective equipment and weapon systems, integrating the SETIS software as well as the Herakles multi-function radar and CAPTAS-4 variable depth sonar, the naval cruise missile (NCM), the Aster and Exocet MM40 missiles and MU 90 torpedoes.