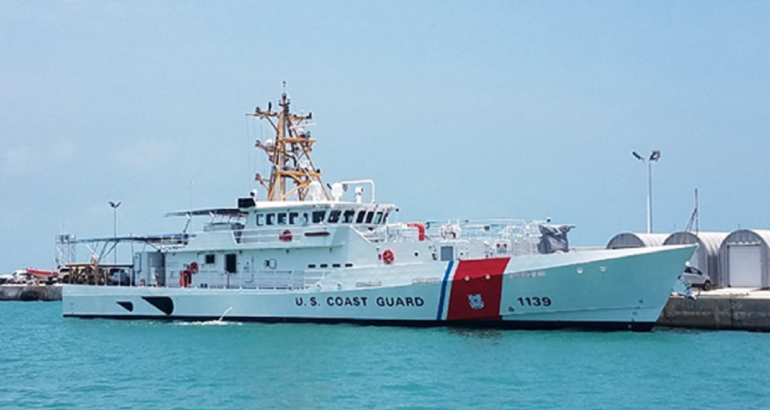 It will be the first of three planned FRCs stationed in Santa Rita, Guam. Stationing FRCs in Guam supports Operation Aiga, an effort to strengthen the community of island nations in Oceania.

“By placing an ocean-going Coast Guard buoy tender and FRCs, we will promote ‘rules-based order,’ build capacity and affirm the United States’ positive and enduring role in the region,”

Electrician’s Mate 1st Class Myrtle Hazard, the cutter’s namesake, was the first active-duty female to serve in the Coast Guard. Approximately three weeks before the United States entered into World War I, Secretary of the Navy Josephus Daniels ordered the recruitment of the first women into the naval reserves. The Coast Guard, as an arm of the U.S. Navy in wartime, also enlisted women. Hazard’s service as an electrician’s mate was unusual as many women served in administrative positions. In fact, while much is unknown about Coast Guard women serving during World War I, Hazard has been cited as the only female electrician in the Coast Guard during that time.

FRCs are designed for multiple missions which include drug and migrant interdiction; ports, waterways and coastal security; fishery patrols; search and rescue; and national defense. They feature advanced command, control, communications, computers, intelligence, surveillance and reconnaissance equipment; over-the-horizon cutter boat deployment to reach vessels of interest; and improved habitability and seakeeping. The ships have a maximum speed of 28 knots, range of 2,500 nautical miles and endurance of at least a five-day deployment. “These modern cutters will replace 40-year-old vessels, enhancing all aspects of the Coast Guard’s surface capabilities in the region,” Schultz noted.

Thirty-six FRCs are in service: 12 in Florida; seven in Puerto Rico; four in California; three each in Hawaii and New Jersey; two each in Alaska, Mississippi and North Carolina; and one in Texas. The Coast Guard has ordered 56 of the cutters to date. Future FRC homeports include Santa Rita, Guam; Astoria, Oregon; and Kodiak, Seward and Sitka, Alaska.