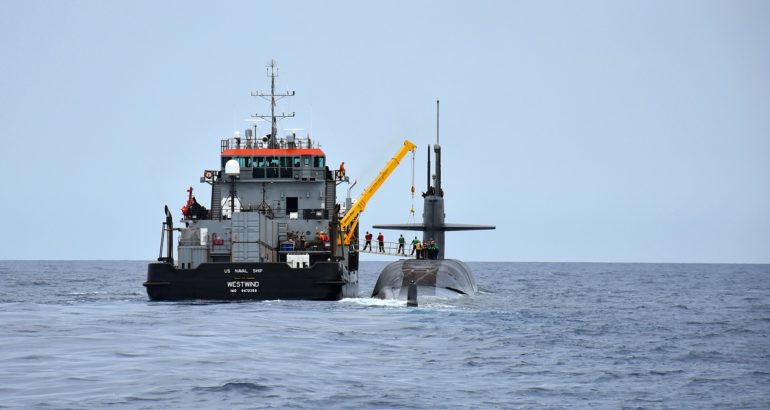 Ballistic missile submarines main rule is to remain undedected in order to maintain credibility in its nuclear deterrence mission. By surfacing, and remaining idle for a relatively long duration (the time needed to swap the crews), the submarine increases the risk of detection. However, the risk of seeing the virus spread among the crew while on patrol represents a way greater security threat. Afterall the crew transfer likely took place not far off Naval Submarine Base Kings Bay in Georgia, and under the watch of U.S. Navy and U.S. Coast Guard patrols.

Naval News‘ regular contributor and submarine expert H I Sutton said about this exceptional event that:

The only advantage is that the crew transfer can be managed better from a COVID-19 perspective. The disadvantages are many. Transferring people and stores at sea is comparatively difficult and dangerous. The U.S. Navy is more than capable of doing it of course. The U.S. Navy do practice at-sea resupply and re-armament, so they have some practice.

Another disadvantage is that any in-port maintenance that needed doing will be postponed.

H I Sutton added: “Presumably the fresh crew was pre-quarantined. Pre-quarantine generally makes patrols harder for the crew and their families. It will make them feel longer. The social isolation of a patrol is already a challenge for recruiting and retaining submarine crews, before adding a couple of weeks of isolation before the patrol.”

USS Maryland (SSBN-738) is the 13th of 18 of the Ohio-class ballistic missile submarines, and has been in commission since 1992.

According to the U.S. Navy, ballistic missile submarines, often referred to as “boomers,” serve as an undetectable launch platform for submarine-launched ballistic missiles (SLBMs). They are designed specifically for stealth and the precise delivery of nuclear warheads.

Each of the 14 Ohio-class SSBNs originally carried up to 24 SLBMs with multiple, independently-targeted warheads. However, under provisions of the New Strategic Arms Reduction Treaty, each submarine has had four of its missile tubes permanently deactivated and now carry a maximum of 20 missiles. The SSBN’s strategic weapon is the Trident II D5 ballistic missile.

The Ohio-class design allows the submarines to operate for 15 or more years between major overhauls. On average, the submarines spend 77 days at sea followed by 35 days in-port for maintenance. In 2014, USS Pennsylvania carried out a record 140 days patrol. Each SSBN has two crews, Blue and Gold, which alternate manning the submarines and taking them on patrol. This maximizes the SSBN’s strategic availability, reduces the number of submarines required to meet strategic requirements, and allows for proper crew training, readiness and morale.