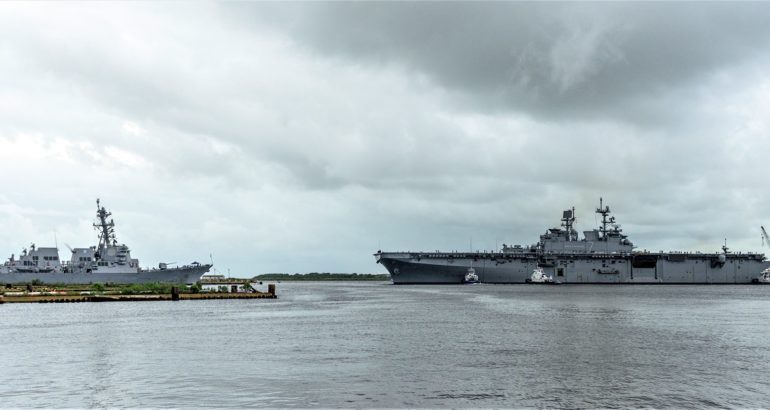 Tripoli enters the Pascagoula River channel passing guided missile destroyer Delbert D. Black (DDG 119), which has been delivered to the Navy by Ingalls, and will sail away later this year. Photo by Lance Davis/HII

“Tripoli sailing away to join the fleet is a proud moment for all of our shipbuilders, industry partners and the hundreds of suppliers that contributed to the production of this remarkable ship. LHA 7 is an incredible asset that will strengthen the Navy’s fleet and protect our nation. We look forward to what the future holds for Tripoli and the sailors and Marines aboard her.”

Ingalls is the sole builder of large-deck amphibious ships for the Navy. America-class amphibious warships are designed to enhance Marine Corps aviation, capable of supporting the tilt-rotor MV-22 and F-35B Joint Strike Fighter. Tripoli will be the flagship of an Amphibious Ready Group, strategically positioning Marine Expeditionary Units ashore across a full spectrum of missions, including humanitarian, disaster relief, maritime security, antipiracy and other operations while providing air support for ground forces.

Tripoli is the third ship to bear the name that commemorates the capture of Derna in 1805 by a small force of Marines and nearly 370 soldiers from 11 nations. The battle, memorialized in the Marines’ Hymn with the line, “to the shores of Tripoli,” brought about a successful conclusion to the combined operations of the First Barbary War.