The Hellenic Navy named and commissioned its second General Support Ship HS Iraklis. The event took place on July 6, at the Salamis naval base.

The vessel is a donation by the family of the President of the Aikaterini Laskaridis Foundation, Panos Laskaridis.

HS Iraklis has a length of 85 meters and a displacement of 4,500 tons. It has two 9,600 horsepower propulsion engines, 2 main axle generators, 4 thrusters, (2 forward and 2 aft) in addition to the 2 main propulsion propellers. Its maximum speed is 15 knots, and it has a large carrying capacity of over 2,600 tons on its open deck and 4,000 tons in oil tanks. It is the sister ship of HS Atlas I, a General Support Ship donated by the family of Mr. Panos Laskaridis to the Hellenic Navy, that joined the Fleet officially last December.

The Minister of National Defense, Mr. Panagiotopoulos, welcomed the incorporation of HS Iraklis to the Fleet, saying that it is of particular importance for the Navy, as it comes to complete the recent incorporation of HS Atlas I, thus modernizing, but also by substantially increasing the possibilities of the on-board support of the operational functions of our fleet.

He went on to say that

“the Navy, as a key factor in the strength of the country’s Armed Forces and one of the strongest in the Mediterranean, guarantees sovereignty in both the Aegean and the wider region. And it makes the country a strong ally for friends, but also a threat to potential opponents, giving credibility and weight to the country’s role in the region’s international developments. ”

HS Atlas I and HS Iraklis both are new ships, built to carry out support missions to oil rigs on the high seas. Their building specifications are excellent and their design has been done with operational flexibility in mind. These ships can carry heavy tanks and combat and support vehicles, cranes, heavy constructions and containers with configuration and capabilities depending on the needs of each mission, while having the ability of DP2 (Dynamic Positioning), ie exact keeping of position and heading under any weather conditions. These ships will be used in refueling missions of the Fleet’s units, as well as for transporting cargo, towing, rescuing shipwrecks, diving and lifting objects from the sea with exceptional precision and firefighting. In addition, they are able to operate as a submarine rescue platform, something the Navy has not had until today. 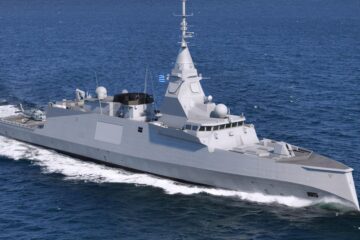