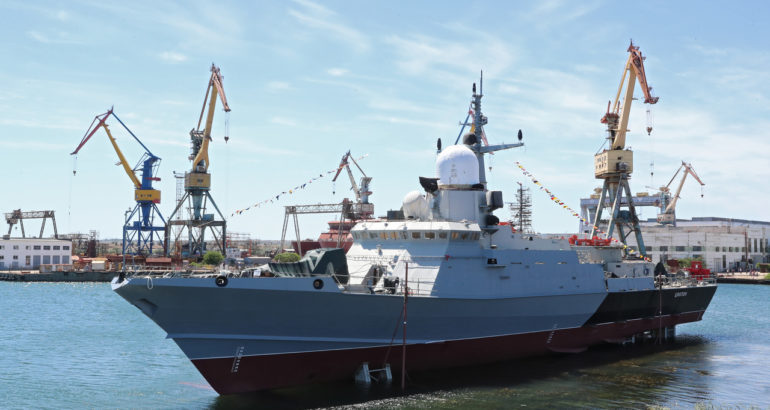 Launching of the Karakurt-class Corvette 'Tsiklon' in Kerch on 07.24.2020. Picture by Information and press service of the Head of the Republic Crimea.

“On behalf of Navy Commander-in-Chief Admiral Nikolai Yevmenov the shipbuilders were congratulated by head of the Navy shipbuilding department Rear Admiral Vladimir Tryapichnikov. The event was also attended by Crimean head Sergey Aksenov and representatives of Kerch city administration,” it said.

Zaliv CEO Igor Obrubov said “it is the first out of three ships of the project built by the enterprise. The successful work demonstrates that Zaliv will continue to justify the trust of the government which gives it important projects.”

Future Captain 3rd rank Oleg Tutchak was present at the ceremony. Under his command, the Tsiklon will complete running and acceptance trials and join the Black Sea fleet.

The Navy operates two corvettes of project 22800. The Mytishchi and the Sovetsk operate in the Baltic fleet. The Odintsovo corvette is undergoing acceptance trials. It is the first corvette of project 22800 to be armed with Pantsir-M.

Zaliv is building the Tsiklon, the Askold and the Amur corvettes of the project.

Project 22800 corvettes are brown-water multirole missile-artillery boats designed to destroy surface warships and boats and repel air attacks. They have a displacement of 800-900 tons, a speed of 30 knots, cruising capacity of 12 days, a range of 2500 miles and a crew of 39 men. The corvettes are armed with precision missiles (one 8-container universal vertical launcher) and artillery guns.