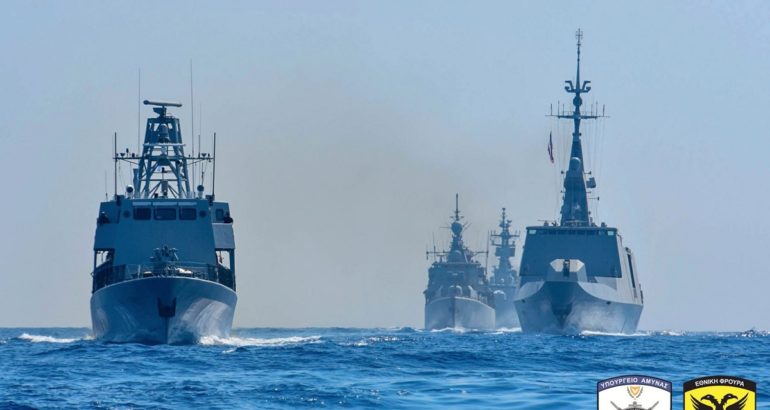 Cyprus, Greece, France and Italy on Wednesday started combined and joint naval-air drills in the Eastern Mediterranean. The exercise, named Eunomia, contributes to the common security in the region and to defend the freedom of navigation, according to the French military.

Taking part in the operation which set to conclude today are:

As we reported earlier, France announced that it would increase its military presence in the eastern Mediterranean, citing “concerns about the tensions caused by Turkey’s unilateral decisions on oil exploration”. On Monday 10 August Turkey deployed a seismic research vessel, the Oruç Reis, escorted by military vessels, in the southeastern Aegean Sea, a disputed area of the Mediterranean rich in gas fields.

An exercise was already conducted between the Hellenic Navy and French Navy on August 13.

In a statement in a local media, Greek Defense Minister Nikos Panagiotopoulos said “the initiative aims to demonstrate the commitment of the four European Mediterranean countries to the rule of law as part of the policy of de-escalating tensions.”

A Cyprus Ministry of Defense statement on Eunomia mentioned: “This initiative demonstrates the collective intention and commitment of the four European Countries, for the implementation of the Law of the Sea (UNCLOS) and Customary International Law, to maintain stability and respect for the Rules of Law, while guaranteeing the freedom of navigation in the Mediterranean.”

Contacted by Naval News, a spokesperson from the French joint command (État-major des Armées) said: “The Quad-EUNOMIA exercise is a multilateral activity, which debuted on August 26, in the south of Cyprus. Combining Greek, Cypriot, Italian and French naval and airborne means, this initiative which contributes to the common security in the Eastern Mediterranean, as well as defending the freedom of navigation. For the figures, being deployed, for France are three Rafale, as well as a La Fayette frigate and its helicopter.“