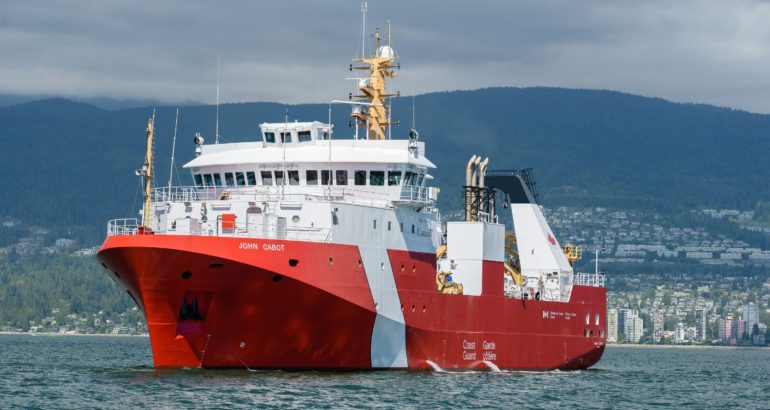 The future CCGS John Cabot begins sea trials just six weeks after its official launch on July 3 at Seaspan’s North Vancouver shipyard. The time span between launch and sea trials is considered best-in-class in the shipbuilding industry and echoes the ship’s 97% complete status at launch, a rare accomplishment at launch that exceeded international benchmarks.

Sea trials mark the final major phase in a shipbuilding project before delivery. Over the next ten days the ship will be put through its paces during rigorous full-scale exercises where specialists from Seaspan Shipyards, representatives from the Coast Guard and key equipment suppliers will conduct a series of performance and seaworthiness tests. The tests ensure that the ship operates as designed and that all systems – including mechanical, electrical, hydraulics, fishing and laboratory, communications, navigation, as well as fire and safety systems – are fully operational.

On completion of sea trials, the future CCGS John Cabot will be prepared for an anticipated delivery to the Canadian Coast Guard in September before sailing to her home port St. John’s, Newfoundland and Labrador where she will take her place in the Coast Guard fleet alongside sister ships CCGS Sir John Franklin and CCGS Capt Jacques Cartier.

“Moving from launch to sea trials in record time, particularly during a global pandemic, is a testament to the incredible talent and determination of the Seaspan Shipyards team, and intense collaboration and teamwork from our supply chain partners and the Canadian Coast Guard. Together, we are moving from strength to strength and demonstrating dramatic productivity and efficiency improvements with each ship delivered. These are exactly the outcomes intended by the architects of Canada’s National Shipbuilding Strategy, and they are the hallmarks of a modern shipyard that is firing on all cylinders.”