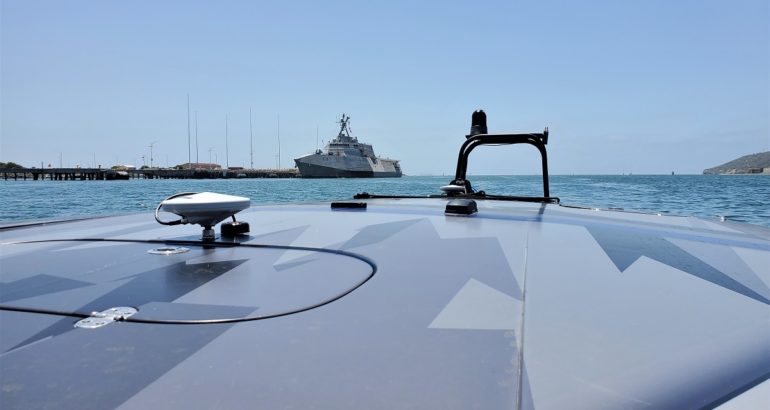 Mantas T38 USV during sea trials in San Diego in July 2020. USS Manchester (LCS-14) is in the background.

Florida-based company MARTAC recently unveiled the new MANTAS T38 Unmanned Surface Vehicle (USV). Sea Trials started in May 2020 in the Intracoastal and off of Daytona Beach in the Atlantic. The high performance USV was then tested in San Diego Bay and out in the Pacific the first two weeks of July and participated in a military exercise.

I am confident that readers of Naval News also read a number of other maritime journals. Most of us in the naval defense space do so, as we keep attuned for best practices throughout the maritime industry. As CEO of MARTAC Inc. which builds and operates the family of MANTAS USVs, I have my team keep a weather-eye on articles that describe cutting-edge technologies in the unmanned surface vehicle world, as well as articles that address innovation in all aspects of naval warfare.

I recently read an article in the U.S. Naval Institute Proceedings written by a serving U.S. naval officer, Lieutenant Commander Ashley McAbee entitled, “The Navy Needs Problem-First Innovation”. There is a great deal of wisdom in what she wrote, but one paragraph in her article caught my attention: “Better would be more cross-pollination between operators and engineers, to give sailor-witnessed problems and sailor-generated ideas traction inside the acquisition apparatus. Warfighters: Invite engineers to your exercises and wargames and get them meaningfully involved once there, at least as a repository for complaints about the state of the art when the pace of operations precludes deeper discussion. Engineers: Beat down the door to attend these opportunities.”

In an effort to achieve what Lieutenant Commander Ashley McAbee suggests, Navy and Marine Corps officials who have invited us—as well as several of our industry partners—to a number of exercises, experiments and demonstrations including the Ship-to-Shore Maneuver Exploration and Experimentation (S2ME2) Advanced Naval Technology Exercise (ANTX), Rim of the Pacific (RIMPAC), Trident Warrior, Bold Alligator, Valiant Shield and others. Additionally, the MANTAS has been evaluated by the U.S. Army Military Ocean Terminal Concept Demonstration (MOTS CD) and the Port of Los Angeles as a harbor security asset.

We participated in these events at our expense to accomplish precisely what Lieutenant Commander McAbee suggested and get direct and valuable feedback from the warfighters who had many hours of hands-on experience with our USV. During these events, MANTAS has performed missions as diverse as intelligence, surveillance and reconnaissance (ISR); intelligence preparation of the battlefield (IPB); resupply to troops on the beach; port and harbor security and others. The MANTAS catamaran USVs we used in these events ranged in size from six-foot to twelve-foot. The UK Ministry of Defence last year placed a procurement contract for 5 MANTAS T12.

Now, with the encouragement of Navy officials, we have scaled-up the MANTAS to the current thirty-eight foot version. We recently took this vessel to a San Diego, a major U.S. Navy fleet concentration area, where a wide-array of Navy officials were able to embark on the MANTAS and see its capabilities for themselves. Those who rode on our new thirty-eight foot MANTAS catamaran USV noted that it has several distinct advantages over current mono-hull USVs. This vessel is designed for speed, stability, and maneuverability. The T38 has a burst speed of 80 knots, cruise speed of 25 knots, it is operable in sea states 1-5, survivable in sea state 7, and its agile twin-hull form allows turns at burst speed generating more than 6 Gs.

For navies such as the U.S. Navy, which are interested in using unmanned maritime systems to perform the mine countermeasures (MCM) mission and take Sailors out of the minefield, the T38’s broad stern and substantial righting moment permit a side-by-side arrangement for both the tow body sonar and a Mine Neutralization System (MNS) Remotely Operated Vehicle (ROV).  Its ballasting system and water-tight compartmentalization virtually eliminates the risk of broaching. The simultaneous stowage and deployment of its payloads, and the ballasting stern well-deck launch/recovery approach, reduce the time required to complete an MCM mission.

We have evolved the MANTAS over the past several years and we continue to take it to Fleet concentration areas like San Diego to put it into the hands of operators. We share the U.S. Navy’s commitment—as well as the commitment of other navies—to making unmanned surface vehicles like MANTAS an important part of our warfighters’ arsenal. Our website has additional information on our evolving family of robust and affordable unmanned surface vehicles that have become better-and-better year over year because sailors have provided invaluable feedback as to how our USVs can best meet their warfighting needs.